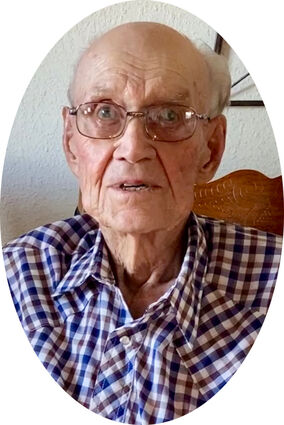 The patriarch of the Buen family, Arthur Kenneth Buen, 94, of Nashua, Mont., passed away peacefully, Friday, Oct. 28, 2022, surrounded by his loving daughters in Great Falls, Mont.

Funeral service for Arthur is Saturday, Nov. 5, at 11 a.m., with visitation at 10 a.m. at First Lutheran Church in Glasgow, Mont., with Pastor Bonnie Novak officiating. Burial will follow at Highland Cemetery, in Glasgow.

Arthur was born on the Buen Homestead Sept. 25, 1928, to Asle and Anna Buen. At that time, he already had four older sisters, Clara, Thelma, Agnes and Bernice. Later Vivian and Harold were born. Arthur was blessed to have a big loving family.

In 1933, he started Spring Valley Elementary Country School. All of his eight years, he was the only student in his grade level. At the early age of nine, while Arthur was walking home from school, his father, Asle, would wave to him and have Arthur take over so his father could go home and get more seed for his fields. In 1946, Arthur graduated Nashua High School. He always started school two weeks late in the fall to help with harvest and two weeks early in the spring to help with seeding the crop. While going to high school, he stayed in the town of Nashua with his sister, Thelma, and his brother-in-law, Marvin.

In 1948, he started farming the Buen Homestead on his own.

On June 30, 1954, he married the love of his life, Eleanor Biem, at St. John's Lutheran Church in Poplar, Mont. Together they had four daughters, Linda Lassila, Charlotte Tabacco, Ann Buen and Marjorie Hill.

Arthur was a very active leader in the community. He said that if it wasn't for Eleanor's support, he wouldn't have been so active in all the organizations he participated in. Since birth, Arthur was a member of Bethel Lutheran Church of Grain and was elected to the church council in 1951, serving the roles of Treasurer and President. He served continuously for 71 years. He was local Farmers Union President for three years, Montana Farmers Union director for one year, and Montana Farmers Union Vice President for 12 years. He served on the Nashua Farmers Union Oil Board as a director for 33 years, Nashua Farmers Union Elevator Board for seven years. He was involved with the Democratic party, Thrivent, Lukes 100 member for 45 years and served as President for two years. He was an active member of Sons of Norway for 30 plus years. He used his talents of cooking lutefisk and organizing steak fries for various events. Arthur was extremely proud of his Norwegian heritage and enjoyed speaking the language.

Arthur loved his lutefisk and lefse for Christmas Eve. This became a Buen family tradition at Christmas time. Later that evening, he loved watching his kids and grandkids perform a small Christmas program with the finale being Arthur singing " I am so glad each Christmas Eve" in Norwegian ("Jeg er sa glad hver julekveld").

He loved going dancing with his beautiful wife, Eleanor, almost every Saturday night in the winter months, and invited relatives to join them. He also loved to play games. Some of his favorites were Pinochle, Whist, Scrabble and Hand and Foot. He adored all of his children, grandchildren and great-grandchildren and loved every moment he spent with them. Arthur loved and truly cared for all people. He was the one you could always count on to lend a helping hand to others; whether they were struggling or just needed his advice. He was always the hand that reached out to help others and gave them a reason to smile and let them know everything would be all right again.

Arthur's farming was his passion and he considered the cows as his hobby. Once he reached his 80s, he realized it was too much to care for his cows so he sold them. Recently, Arthur was proud to sell his farm to Kevin Tweten, a young neighbor, who both Arthur and Eleanor greatly admired.