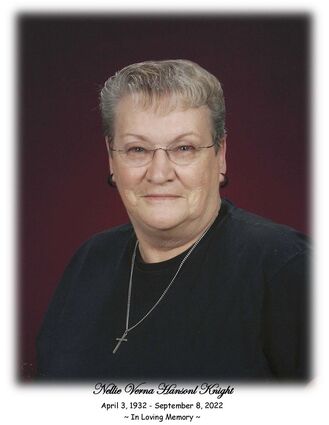 Nell was born to Daniel Matro Hansonl and Opal Fern McPeek Hansonl in Corwine Center, Mont., April 3, 1932. Nell went to be with the Lord on Thursday, Sept. 8, 2022, at home with family at her side. She passed away with grace after a long, arduous, decline in health. She never lost her sense of humor to the end and had a deep commitment to her relationship with the Lord.

A celebration of life will be held Saturday, Oct. 8, at 1 p.m. at the Blackfoot Valley Bible Church in Lincoln, Mont.

Nell grew up in Whitewater, Mont., and graduated in 1950. She married, divorced and never remarried. Nell raised two children as a single parent. She enjoyed a close relationship with her children as they grew into adults.

Nell held many jobs over the years ending with Mountain Bell as a telephone operator in Salt Lake City, Utah. After retirement, her first thought was getting back to Montana.

Nell is preceded in death by her parents, Daniel and Opal Hansonl; her sisters Ivy Hansonl and Pauline Davies; and brothers William, George, and Max Hansonl.