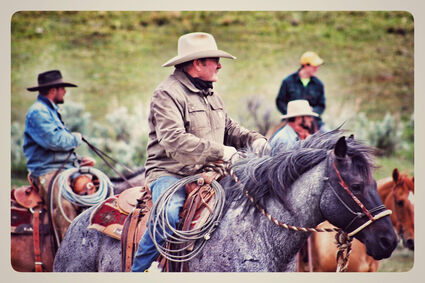 Monte Layne Eayrs, age 68, passed away at the Glendive Medical Center Monday, Aug. 15, 2022, after a courageous, hard-fought battle with cancer.

A celebration of life will be held Saturday, Sept. 24, 2-5 p.m., at the Glasgow VFW, all friends and family are welcome.

He was born to Ralph "Dutch" and Dorothy (Dolson) Eayrs in Glasgow, Mont., on Aug. 22, 1953. He joined his brother, Jack Lund, and was soon the big brother to his three sisters, Tracie, Colleen, and Kristi.

Monte grew up on the Milk River where he developed his hard work ethic and love of raising cattle and seedstock. Throughout his childhood the Eayrs showed angus cattle all over eastern Montana. During high school he wrestled for the Scotties and coach Mr. Kato left a lifelong impact on Monte.

After graduating from Glasgow High School, he attended MSU Bozeman for two non-consecutive quarters and decided that the cowboy way of life was for him. In 1974 he married Nina Ewing and with this union, his daughter Kathryn was born.

During these years, Monte worked on ranches from the red desert of Wyoming to the Canadian Border and always had a job at the

Cornwell Ranch.He also partnered with Sherm Ewing, running cattle all the way from Hardin to Browning.

In 1987, Monte and Stephanie Helland were wed, they soon welcomed their three sons, Logan, Mark and Paul. They made their home north of Glasgow, ranching and raising Black Angus bulls as seedstock alongside Dorothy. In 2001, the opportunity presented itself to the family to purchase a real ranch southeast of Fallon, Mont. They moved and called Cabin Creek home.

Monte will be remembered as a family man, story teller, an old school real stockman, and cowboy. He was humble, dedicated,

and methodical. Monte never believed in taking shortcuts in life, always electing to do things the right way. He raised four wonderful children and was very proud of each of them. Monte was blessed with five grandkids, they were the light of his life. He will be dearly missed, but we will continue to see his presence in the cattle herd he built and the lessons he taught us. When Monte was diagnosed with cancer, rather than asking for prayers for himself he asked everyone to pray for rain.

Monte is preceded in death by both sets of grandparents; his father; and in-laws Ron and Joan Helland.

In lieu of flowers, donations can be made to the Glendive Community Cancer Fund or Prairie County 4-H.