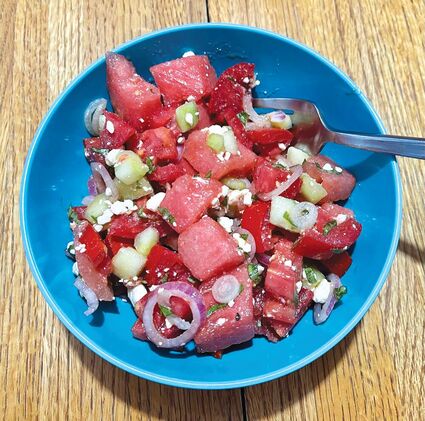 The salad recipe in this week's column.

As much as I hate to see summer go, I cannot prevent fall from arriving. I hate seeing fall because we all know what follows, usually much too quickly. I'm giving in to reality, though, and starting on my regular fall clean-up-the-garden chores.

I have all my houseplants that spent these past months outdoors gathered together on the front deck. If a frost threatens (and we've lucked out so far and not had one, although we did drop to 35° a couple weeks ago) I can easily get them covered. They've not been moved inside yet as I still intend to blast them with a light dose of Tempo so the small critters don't also move inside. There have been enough of those sneaking in as it is. I also need to whittle down the number of potted plants that will move back in. I did give away a couple of duplicates last week, but I still have more twinsies.

I spent some time this afternoon cleaning off the onions I'd pulled a month ago. Being a master procrastinator, they were still lying on the netting where I'd left them. Of course it actually rained (almost a quarter inch!) this morning (Saturday, Sept. 17). To prevent any possible rotting or moldiness forming, I went out in the warmth of the afternoon to twist off the remaining tops, thereby loosening and removing the papery outer skins. It made my hands very muddy/dirty. The onions are now hanging in the unused back bedroom (I lack a basement) in old mesh potato bags. I kept out all the small ones to use first. I love caramelized onions.

Two rows of the garden are now basically cleared. The dying vegetation (a lot of volunteer flowers) was pulled, piled on my work wagon, and hauled to my growing "discard" pile. The deer are trying to help with the clearing of vegetation, but they aren't limiting themselves to dying vegetation. They've eaten an entire cabbage, started on another, and stripped all new growth from my broccoli plants. Carrot tops are also disappearing. I'm not sure whether part of the blame for that goes to the grasshoppers, but I'm not seeing too many of those. I'm going with the deer being to blame; they've obviously figured out how to bypass the electric fence. I don't mind giving up cabbage and broccoli, but they also ate my largest red pepper, nibbled the other big one, and ate all the leaves off the top two plants. They also chewed a couple green tomatoes. They haven't, as of yet, found the currently blooming again green beans.

We've seen two does and four fawns in and beside the garden these past couple of weeks. The fawns still have spots. They panic when I show up outside, or when we holler out the windows, and act like they don't know how to avoid the fence. They obviously do know or they wouldn't be in there! There is a young spike buck every now and then. His spikes are lopsided: one is about 6-8", while the other is stunted at about 4" (just big enough to see from a distance). I've named him Stub. The does keep running him off and away from their babies.

I'm going to close with a different salad I made recently. I'd wanted to try it last summer, but waited too long and didn't get another watermelon. It's surprisingly good. Of course, I cut it in half since I'm not feeding 12. But I used the full amount of dressing. It didn't seem to be too much. I soaked the red onion in cool water to cut its bite while I got the rest prepped. And I peeled the cukes, quartered them lengthwise to remove the seeds before chopping. Then I put them in a colander and sprinkled with salt to draw out moisture, and patted with paper towels before adding to the bowl. It kept the leftover salad from getting watery. Even though it says serve immediately, I enjoyed my share for three days (our elder daughter also enjoyed a serving). 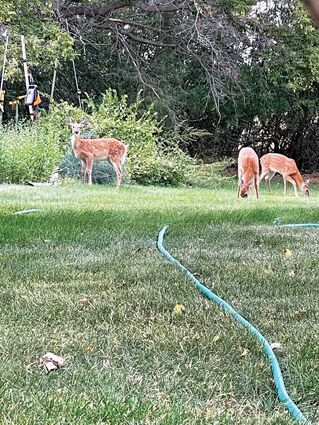 Three of the fawns that visit the yard and garden - haven't caught a photo of Stub yet.