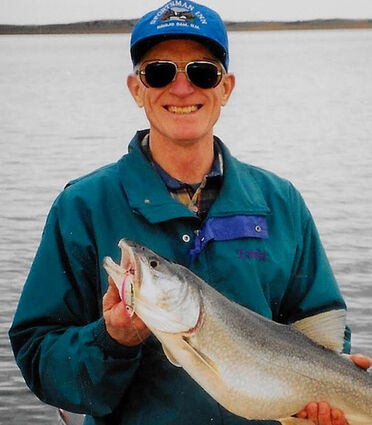 "I have lived a full and wonderful life." Emitt

Emitt Duane Northup was born 26 June 1945, to Simeon Emitt and Ila Slattum Northup, in Glasgow, Mont. He was promoted to happy big brother two years later when Daryl Dean was born. He became a caregiver very young and that became an ingrained part of his personality. He loved helping friends and family and knew how to do everything!

Emitt and Terry Pugh married 19 September 1967, and began building their family - welcoming Adam, Holly and Casey and loving every minute .... fishing, hunting, camping, playing ball, working on cars .... just all of it.

Emitt was active in Boy Scouts as a youth, and when his sons and grandsons were busy in Scouts, it was still a favorite activity. He was also an adopted Girl Scout .... Always ready to join with Terry, Holly and Hayden in the Girl Scout activities.

He was a huge Scottie fan and went to football, basketball, volleyball games .... Knew all the players and celebrated each of their successes.

All these activities brought young people into his world that he took time to get to know and kept as cherished friends. That has continued with his grandkids and their friends through Fort Peck Summer Theater Camp, Columbia Falls Swim Team and Boy Scout Troop 62 of Idaho. He loved to travel and was up for any adventure.

Emitt was a railroad conductor for 45 years, starting with Great Northern Railway and ending with BNSF in 2008. Nobody was a stranger. The friends he made, the people he worked with and his Methodist Church friends, all became family. They worked, played, hunted, fished together and helped each other with projects. The "Brothers" you choose.

Emitt was welcomed into heaven on 26 August 2022, by his parents Ila and Simeon, Terry's parents Tom and Rachel Pugh, his brother-in-law Tommy Pugh and sister-in-law Wendy Pugh.

Emitt is survived by Terry, his wife of 55 years; son Adam, his wife, Deaun, and their sons, Ethan and Aaron; daughter Holly, her husband, Ben, and their children, Hayden, Samuel and Zachary Emitt; son Casey, his sons, Ryan Simeon and Andrew, and their mother, Daisy. Also surviving is sister-in-law Valerie Pugh; brother Daryl and his wife, Paulette; nephew Levi (Jennifer) and his children, Madison and Cole, and their mother, Melanie; nephew Sky (Karen) and their children, Tregg, Kavyn, and Kensley; nephew Jerry Pugh; nephew Dustin Pugh and his children, Breeanne and Thomas Pugh IV. Countless close friends, classmates and extended family.

He will be missed.

Services for Emitt Northup will be Saturday, 17 September at Glasgow's First United Methodist Church at 12 noon. Please join the family immediately afterwards for a full BBQ lunch at the Valley Ridgerunner's Saddle Club.