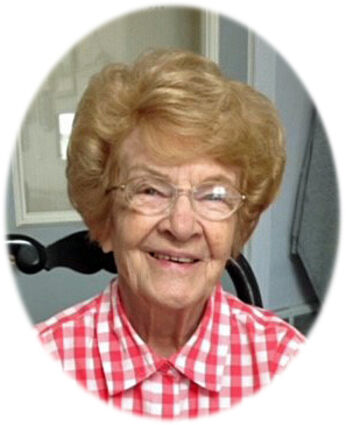 Beverly was born March 20, 1935, at FMDH to John and Aileen (Christinson) Rusher. Beverly received her education from the Glasgow School system, graduating from GHS in 1953. Bev was voted "Best Dancer" in her class.

Beverly married Vernon Edward Copenhaver on Feb. 6, 1955, and made their newlywed home in Glasgow in the Keagy Apartments before moving to Hinsdale, Mont., and starting their family. She belonged to the Methodist Church in Glasgow.

Beverly was the middle child of seven closely-knit siblings born less than eight years in the 1930s. Though she often claimed she was adopted, there was no denying the close resemblance they all bore. She and younger sisters all wore the same wedding dress, later worn by niece Leya in a style show.

Beverly began her long-term employment with JC Penney's as a part of her high school DECA program. She retired after lovingly giving 40 years of dedicated service to JC Penneys. One could always spot Bev at the store as she was described as the lady with the blonde bouffant hairdo and the pencil stuck behind her ear.

For many years Bev could always be counted on making pies for the Hinsdale Methodist Church dinners and fundraisers, with pumpkin pie being her specialty.

Many will remember Bev for setting up a "Big Feed" during the Pistol Shoots that the family hosted at the Copenhaver Ranch. Bev and Vernon traveled for Trap Shoots and made many lifelong friends. During harvest season, the crew could always count on Bev for a delicious lunch delivered to the field, always making it into a special time. At the beginning of her marriage, and into the early 80s, the Copenhaver Ranch would trail cattle up through north Valley County, just south of the Canadian Border. She would drive the pickup truck and camper bringing "Meals on Wheels" to the cowboys and cowgirls with one overnight stay on the prairie.

Bev and Vernon loved playing cards and most weekends they could be found playing pinochle and whist with friends and family. Bev and Vernon loved to go dancing at Genevieve Hall, Legion Hall and anywhere they had a dance. Bev and Vernon had a special group of friends that they all met up with at the dances and there was an unwritten rule that whichever couple went home first could plan on company from the dance for a 2 a.m. breakfast.

Bev will be remembered for her quick wit and charm and usually getting her own way. Bev loved deeply and was devoted to her family. Bev and Vernon followed the grandchildren and great-grandchildren in their sporting events, oftentimes camping out during swim team meets. Whenever there was an opportunity, Beverly would take home a grandchild or two to spend time at the farm. She would even take her grandchildren out of daycare to take home and spoil.

In her later years Bev liked Circle a Word and fluffed many of Marie Rice's scrubbers, now being made by Juanita Morehouse. Bev's last home was Valley View Nursing Home where she was loved by so many and received excellent care from her VVNH family.

A memorial has been established to the Hinsdale Ambulance Service and Pioneer Museum of Glasgow.