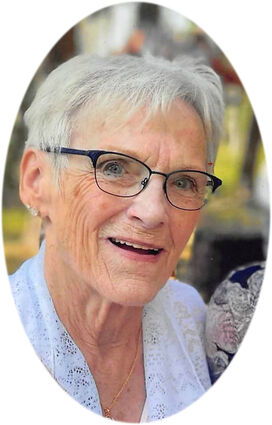 Darlene Riggin Stratton, passed away peacefully on Thursday, Aug 4, 2022, with her children by her side.

Darlene's family asks all who want to share their love and stories of Darlene to join us for a few laughs and celebration of her life at the Elks Club on Thursday, Aug. 11, starting at 6 p.m. A Funeral Mass will be held for Darlene at St. Raphael's Church in Glasgow, Mont., on Friday, Aug. 12, at 10 a.m., and burial will follow at Highland Cemetery, in Glasgow.

Darlene was raised and schooled in Glentana, Mont. She was one of six children born to Mark and Eleanor Hill. At age 10 her family moved to Glasgow for children to attend high school, but continued the farm life in the summers. Darlene attended Glasgow High School, graduating at Glasgow High in 1957. She opted for no college at that time and started working at the south side school as a secretary. In 1959 she met the love her life, Guy "Bud" Riggin. They had a yearlong courtship and married in October 1960. They then moved to Nashua, Mont., and began their life together. She and Bud had four children and in mom's words had "the best life ever." She often told us this was the best time of her life. In 1975 a tragic accident took the life of Bud, leaving her alone to raise her four children. And that she did. After grieving hard and overcoming the loss of her husband, she relied on her strength and faith and dug deep to give her children a life of love and good memories. Mom worked hard and after a few years at the Valley County welfare office, she went to work for a Wills Office World in Wolf Point, Mont. She was a successful salesperson and eventually was promoted to store manager. From there she chose to go in to the insurance world and started selling insurance for Prairie States, where she rose to the top of her field.

In 1988 she reunited with an old friend from high school. Together they enjoyed companionship and love. She and Clarence Stratton were united in marriage in 1989. They enjoyed many years of travel, dancing and companionship. Mom gained two step-children, Danny and Sherry Stratton, and two step-grandchildren, Chad and Curtis Stratton, through this marriage. Clarence passed away in 2001.

Mom lived in Nashua all of her adult life, living and enjoying her home, yard and garden. She was a self-taught seamstress, sewing most of our childhood clothing and after retiring became a talented quilter. She opted for easier lifestyle in 2016 when she moved back to Glasgow and to Prairie Ridge Senior living. We will be forever grateful to her friends and the staff at Prairie Ridge for their care, love and friendship over the last six years. It truly became her home away from home. During the last year at Prairie Ridge, she enjoyed a special relationship with Gilbert DeSonia. He was a true blessing during her last chapter of life.

Mom's strength is apparent when you know her life. From being raised during the Depression, losing two husbands she loved dearly, raising four children on her own and winning two battles with cancer. She felt it was a little unfair when she was diagnosed with a third type of cancer, one her body could not fight.

Darlene is preceded in death by her mom and dad; her five siblings, Donna, Bob, Jim, Bonnie and Carol; her husbands, Bud and Clarence; and many of her lifelong friends.

She is survived by her four children, Darla Smith, Nancy Yager (Dennis), Marc Riggin (Felicity) and Jodi Martin (Cameron). Darlene was blessed with 10 grandchildren and to date 13 great-grandchildren. She also leaves several nieces and nephews and her family at Prairie Ridge, including her good friend and companion, Gilbert DeSonia. She leaves a legacy of hard work, strength, perseverance and faith that will forever be threaded through our family.

In lieu of flowers please send a donation in Darlene's name to the Nashua Senior Center.