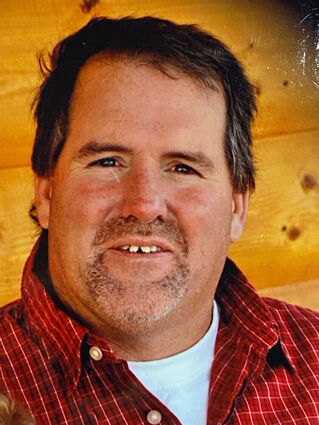 Gregory Joseph Skiff passed away peacefully at his home with his family on Monday, July 25, 2022.

Greg was born on May 4, 1965, in San Jose, Calif., to Patricia M. (O’Connell) and Russell G Skiff. He joined sister, Jacqueline and brother, David. Greg moved to Montana with his mother and brother early in life to be closer to her family. He graduated from Glasgow High School in 1985, and in the early 90s moved to Malta, Mont.

In 1999, Greg met Katie Mangis and they were married July 8, 2000, and made their home in Malta with their three children, David Matthew, Russell Craig “R.C.” and McKinley Erin. Greg worked many various jobs over the years and in 2006 was injured in a work accident where he became paralyzed. Nothing ever slowed him down, and he never lost his positive attitude about life. He continued to coach youth sports, play pool and darts and cheer on the Mustangs and M-Ettes and the Oakland Raiders, New York Yankees and Notre Dame Fighting Irish.

In addition to following his kids in everything they did, he was an active member of the Malta Athletic Club and served for almost 10 years on the Malta Public School Board of Trustees. He was passionate about sports and the area’s youth. He always wanted to find a way to help those less fortunate.

Greg was an outgoing individual and always made friends wherever he went. Those friendships were cherished throughout his life and he loved more than anything to get together and reminisce. But no stories made his eyes light up as much as those that involved his children and later his two grandchildren, Tobias and Elsie.

Wilderness Funeral Home has been entrusted with arrangements and services.