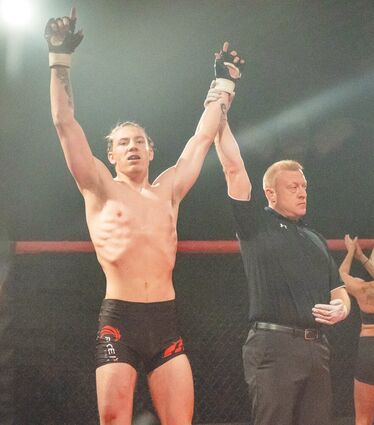 Damien Nesbitt, 2022 GHS graduate and standout Scottie wrestler, made his MMA debut July 23 in Glasgow at the KillEagle Promotional fights in the Valley Event Center. He faced off against Darrius Longknife in the cage, winning his match in the first round. Nesbitt spent a fair amount of time on his feet, landing hits and kicks, before showing his wrestling roots with a strong ground-and-pound finish. The event featured a number of fights – both MMA and boxing – with a number of results from a knockout to TKOs to decisions. All the fighters left it all in the cage, with one leaving more after fighting with a stomach virus. "I feel pretty good actually," Nesbitt told the Courier the day after his victory.

KillEagle Promotions was in town again July 23 for another round of MMA fights. The highlight – at least for the hometown crowd – was Damien Nesbitt’s debut and first-round victory.

With only two months of MMA training under his belt, combi...