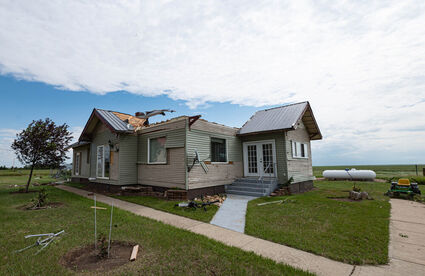 The Parsonage of the Catholic Church in Glentana lost its roof in the July 18 storm. Joy Schuster, who was in the house at the time, was not injured. 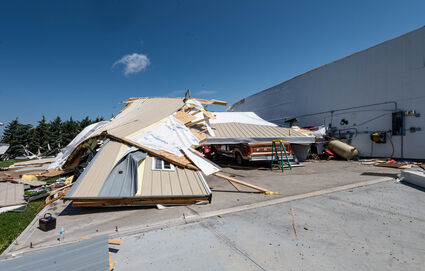 A new shop at the St. John's farm was completely demolished by the storm. Scott St. John was in the shop and sought shelter first under the pick-up then moved under a combine when the pick-up began to roll under the force of the winds. St. John sustained no injuries.

A tornado-warned storm went through Glentana July 18. The small community experienced extensive damage with initial estimates to be in the millions of dollars. No injuries or deaths occurred.

The highest recorded wind gust known was 109 mph. One witness reported a funnel structure touching down a few miles from the town. A team from the National Weather Service office in Glasgow was on site today, July 19, to survey and assess the damage.

Clean-up efforts by area residents are ongoing thanks to the support and volunteer work of all available hands.

The Glasgow Courier is awaiting the official report and will have an in-depth story when available.