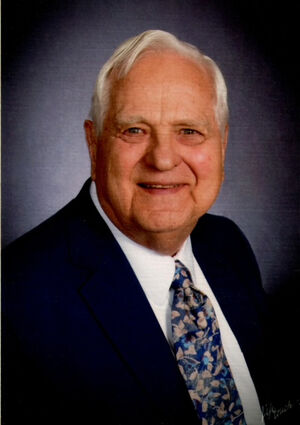 On Friday, June 24, 2022, Reverend Edward L. Novak passed away to the waiting arms of his Lord and Savior.

A celebration of Ed's life will take place on Saturday, July 30, at 11 a.m. (central) at Bethlehem Lutheran Church in Minneapolis, Minn., with visitation starting at 9:30 a.m.

The service will also be broadcast virtually via a link available through Bethlehem Lutheran Church or Washburn-McReavy Funeral Chapels, Washburn-McReavy.com 952-920-3996.

Ed was born in Omaha, Neb., on Dec. 17, 1933, the son of Sena (Mandsager) and Edward John Novak. In 1946, his family, including his two brothers, Gene and Bob Haycraft, moved to Eagle Grove, Iowa. While in Eagle Grove, Ed participated in plays, operettas, vocal and musical ensembles and thrived in football, track and academics. However, the highlight of moving to Eagle Grove was meeting the love of his life, Lorene (Olson) Novak, whom he married on Aug. 27, 1955.

After high school, Ed attended Eagle Grove Junior College and graduated from St. Olaf College in Northfield, Minn., in 1955. Ed attended Luther Theological Seminary and upon graduation in 1959 began his life-long commitment of serving his Lord and Savior.

After retirement, Ed and Lorene moved to New Brighton, Minn., in 1998 where Pastor Ed once again accepted the call to ministry and served as Visitation Pastor for Christ the King Lutheran Church. Throughout their lives, Ed and Lorene not only served the local parish but were always active members of each community by serving on various boards and civic organizations.

In 2007 Ed was diagnosed with a mild form of dementia. Until his passing, Ed dealt with his progressive illness with acceptance, humor and ultimately relied upon his life-long partner, Lorene, to meet his basic needs with loving care and kindness. Ed was a leader, a father, a faithful husband, grandfather, great-grandfather and ultimately a faithful servant of the Lord. His life's work was dedicated to promoting equality and justice. During his long and fulfilling life, Ed enjoyed hunting, fishing, golf, swimming, his golden retrievers, and traveling. Most importantly, he enjoyed spending time with his family.

He is survived by his wife, Lorene, whom he loved unconditionally; his daughters, Heidi (Joseph) Flores, Karin (Clint) Stockwell and his son, Nathan (Julie) Novak; his grandchildren and great-grandchildren.