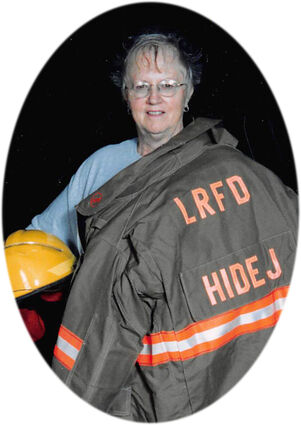 Jane was born May 29, 1943, in Grand Rapids, Minn., to Ward and Virginia Passard Ames. She attended school in Grand Rapids and graduated in 1961 from Grand Rapids High School. After graduation, Jane moved to Minneapolis, Minn., where she worked as an X-Ray tech at the hospital.

Jane married Dr. David Hide in 1965 in Grand Rapids then moved to Iowa where David completed his doctor residency. They moved to Glasgow where they welcomed a little boy, Tim, to the family. Tim was Jane's pride and joy. David's career took them to California for a couple of years, then back to Glasgow.

Jane's husband David passed away in October 1994. In 1996, Jane started working at D&G Sports and Western with Darrell Morehouse. At D&G you would always be greeted by Jane with her smile. After David's passing, Jane met Merrill Johnston, of Glasgow. She loved to help Merrill work with the livestock. Jane welcomed Merrill's sons, Brady and Brian Johnston, to her family.

Jane had a true love for horses and her dog Rounder. Jane loved to travel with Merrill to Kalispell to see family and friends. In 2009 Merrill passed away and Jane continued to work and volunteer many hours at the Fire Department.

Finally, in 2010, Jane retired from D&G Sports and Western and enjoyed life with her Global Grannies club - traveling all over the world. Jane and Tim enjoyed many trips back to Minnesota to visit her family. Jane loved to play cards, hang out with the PEO sister hood and Golden Girls- which she handled all their investments. Jane loved her time driving around with Tim, she was so very proud of her son. In March of 2022, due to health reasons, Jane was moved to Valley View Nursing Home. While at Valley View, Jane loved to watch the birds and loved the black cat.

Jane was preceded in death by her parents, Ward and Virginia Ames; a sister, Judy Rossow; and husband David Hide and Merrill Johnston.

Jane's family received friends from 6 to 8 p.m., on June 27 at Bell Mortuary, in Glasgow. Funeral service were at 10 a.m., on June 28, at the First Lutheran Church in Glasgow. Burial is in Highland Cemetery. A luncheon at the church followed.

Condolences may be left at Bell Mortuary or online at bellmortuarymontana.com.