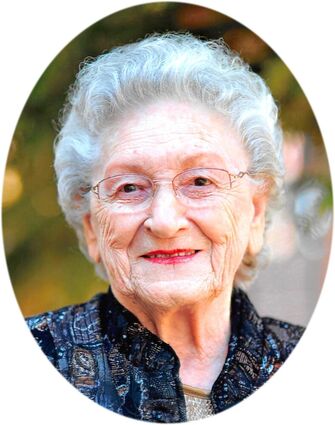 Services will be held on Tuesday, June 28, at 3:30 p.m. at the Assembly of God Church in Glasgow, with Pastor Tom Fauth officiating. A reception at the church will follow the services.

Hilda was born to Kon and Emma Fuhrman on April 2, 1922, in Glasgow. She attended grade school at the Fuhrman School and graduated from Glasgow in 1940.

In 1945, she married Carl Swenson. To this union were born three children: Karleen, Randy and Janet. They lived on their farm northeast of Larslan for 13 happy years until Carl's passing. Later she married George Rosencrans and together they had a son, Hal "Gus" Rosencrans.

Hilda spent many of her working years bartending in Nashua, Glasgow, Circle and Opheim. She purchased the Mint Bar in Opheim from Clarence and Maggie Anderson and ran it until 1985. Throughout those years, she made many acquaintances and lifelong friends.

She was a hard worker and spent countless hours canning, butchering chickens, baking and gardening, just to name a few. Some of her favorite past-times were embroidering, playing cards, crossword puzzles and fishing and in her later years she looked forward to Bingo nights at Nemont Manor where she resided for the last 19 years.

We will love and remember you always, Granny Gum!