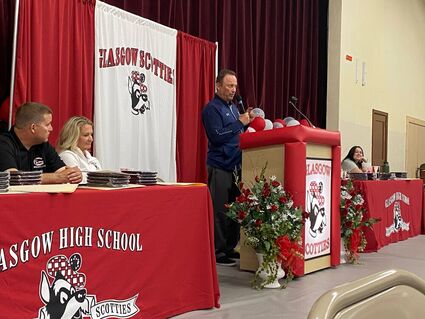 Courtesy Photo / For The Courier

Steve Keller speaks at the Scottie Booster Club All-Sports Banquet May 31. Keller is the current Head Men's Basketball Coach at the University of Providence in Great Falls where he just completed his 4th season at the helm of the Argo program. He has led U.P. to two NAIA National Tournaments and a Frontier Conference title. Prior to his arrival in Great Falls, he built the U of M Western Bulldogs into an NAIA power, leading them to 3 Frontier conference championships and 8 national championship tournament appearances. Coach Keller started his illustrious coaching career at nearby Opheim High School where he led the lady Vikings to 3 consecutive Class C State Championships from 1982 to 1984. He soon moved to the AA ranks, where he guided the Helena High Bengals to three Girls state Championships in 1990, 1991, & 1997. Before moving to the college ranks, he amassed an impressive 610-180 record as a Head High School hoops coach. He was inducted into the Montana Coaches Association Hall of Fame in 2005 and later took over coaching the Montana team in the Midland Roundtable Montana-Wyoming all-star basketball series in 2012 and has a perfect 18-0 record.