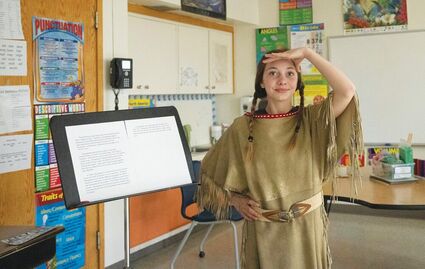 A'Aligha Jones / For the Courier

Sacagawea (Jersey Sallee) stands ready to welcome visitors to the Wax Museum, courtesy of Hinsdale's fifth and sixth grade classes, May 25. Hinsdale's fifth and sixth grade classes hosted a Wax Museum May 25 under the guidance of Connie Mogan. The culmination of weeks of work delighted visitors who learned the history of significant Americans. Each student chose their own notable leader to represent. Ryan Jones chose Anne Frank and Isabelle Jones represented Harriet Tubman. Lilly Earls (who was not in attendance) chose Colonel Sanders and Reese Bowman presented Abraham Lincoln. Jersey Sallee presented Sacagawea and A'Aligha Jones chose Meriwether Lewis, both decked out in authentic deerskin ensembles on loan from Mary Helland and Mary's Mercantile in Glasgow. The Wax Museum was part of a larger arts show showcasing the creative talents of the elementary students. The presentation welcomed family and friends to admire the creations of the young Raiders, from paintings to sculptures to chalk art on the school sidewalks depicting human anatomy lessons. The wax museum presenters were thrilled with their work and the success of their show though lamented by the effects of standing still for an extended period of time as they welcomed the end of the school year. 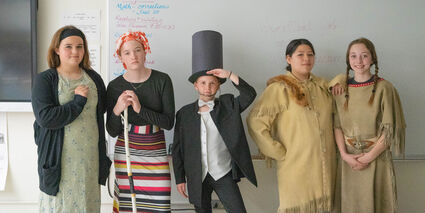