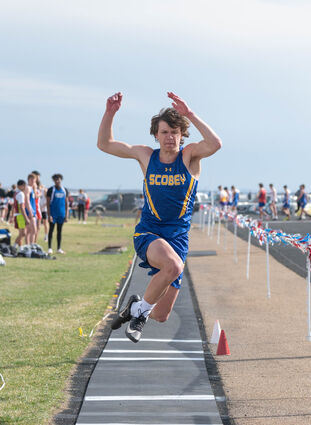 Opheim's Bo Anderson competes in the triple jump at the Norm Girard North/East Top 10 meet May 3 in Glasgow.

Opheim's tracksters continued to help propel the Unified Scobey-Opheim track teams to top spots at their final regular season meets this past week.

Carrie Taylor and Fuhrmann helped the Scobey-Opheim girls to first place with 165 points at the Gene Nelson Memorial Friday in Wolf Point and another first place – at the time the meet was called for weather – at Hinsdale's Jean Dreikosen Memorial meet in Glasgow Saturday.

Carrie Taylor took third in the girls' javelin at the Top Ten meet with a throw of 112-10 while Fuhrmann placed ninth in high jump after clearing 4-08.00.

Carrie Taylor earned points in shot put and javelin, while also competing in the discus and long jump. Her 28-00.00 throw in shot put placed her in sixth. She also placed sixth in javelin, throwing 89-10. Carrie Taylor took ninth in discus with a throw of 74-09 and 19th in long jump with a personal record leap of 10-08.00.

Carrie Taylor took sixth in the girls' discus with a season record 84-09 throw.

The Unified Scobey-Opheim Spartans begin their postseason Saturday, May 14, at the District 2B/3C Track Meet in Glasgow with events beginning at 9 a.m.