Scottie softballer Brielle Partridge connects on a hit during Glasgow's Red & White game prior to the start of the regular season. Partridge, along with Ashlee Meland, went 4-for-4 at bat in Sidney to help lead the Scotties to a 20-3 win over the Eagles in Sidney April 11.

In their one game of the week, the Scottie softball squad brought the heat – before the storm of the Spring hit – and took down the Class A Sidney Eagles in four innings by a score of 20-3 April 11 in Eagles' territory.

Glasgow wasted no time in establishing their scoring superiority in the matchup, lighting up the scoreboard on the second batter and turning in a seven-run first inning.

Ashlee Meland connected after several foul balls for a single then rounded the bases when Stevie Hartwell reached first on an error. Hartwell scored on the next at-bat, when Brielle Partridge singled on a ground ball. Daley Aune singled then rounded home on a Macy Martin double to left field.

Tatum Nyquist stepped up to the plate for another single and sent Martin home. Carly Nelson singled next and Nyquist scored when Alexis Murdock grounded out. Zandora Longtree was walked, leaving her and Nelson on bases. Meland started the lineup again for the Scotties and doubled on a fly ball to center field, sending Nelson and Longtree home.

Sidney in their first at-bat, scored twice before being stopped by an out on the base paths and Glasgow maintained their lead with two more runs in the top of the second. Partridge scored when Aune grounded out. Martin reached first on a bunt then scored on a Nyquist single.

The Scotties shut the Eagles out in the bottom of the second, with two ground outs and a fly out. Glasgow then added two more runs to their tally.

Meland scored on a Partridge single to left field and Hartwell followed when Aune grounded out. Sidney added their final run of the game in the bottom of the third.

Glasgow then exploded in the top of the fourth, scoring nine times before shutting Sidney out and ending the game early.

Nyquist doubled on a fly ball to left and scored on Nelson's ground ball to right to start the inning for the Scotties. Murdock then sent Nelson home on a triple to right field. The Eagles instituted a pitching change to no avail as Meland singled and sent Murdock home. 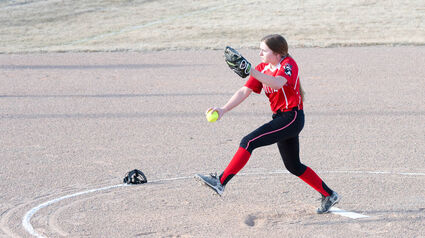 Meland and Partridge both went 4-for-4 at the plate as Glasgow outhit Sidney 19-6. Martin was 3-for-3 at the plate and Nyquist hit 3-of-4. Aune led the Scotties in RBIs with five and Meland added four. Partridge, Martin, Nyquist and Murdock added two each. Aune, Hartwell, Martin, Meland, Nelson and Partridge each had a stolen base.

Meland stayed in the pitcher's circle all four inning for the Scotties, throwing 62 pitches. She allowed three runs on six hits with a 56.5 strike percentage with two strikeouts. Glasgow turned in a clean game with no errors. Nelson led in plays with six.

The Scotties will be in Havre Monday, April 25.