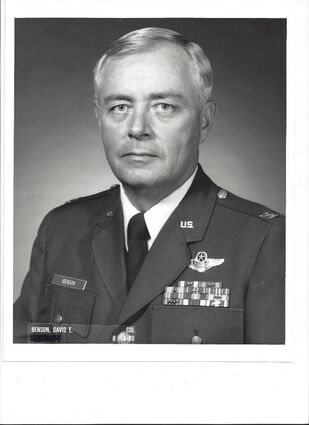 Born, raised and educated in Glasgow, Mont., where he excelled in sports and band. He joined the USAF after graduation from Northern Montana College in 1964. Dave served his country for nearly 29 years and was a Vietnam and Gulf War I veteran. His flying career as a navigator included aircrew duties in KC-135, RF-4C and OV-10 aircraft. His many awards and decorations included the Legion of Merit, Bronze Star Medal, Air Force Meritorious Service Medal with 3 oak leaf clusters, and Air Medal with 2 oak leaf clusters, among others. His successful AF career included assignments around the world and in leadership positions at every level, culminating in eight years as a Combat Support Commander.

Following his Air Force career, he was the Lakeway, Texas, City Manager for 11 years. After retirement, he continued to serve his community in various volunteer capacities. He enjoyed his retirement years traveling the world with his wife, Cheryl, and close friends. Golf and fishing were among his passions along with enjoying the many family and school reunions held in Montana.

Dave is predeceased by his brothers, Rick Benson and Larry Benson; and his son Brian Benson.

In lieu of flowers, please consider a donation to the Lakeway Church or your favorite charity.