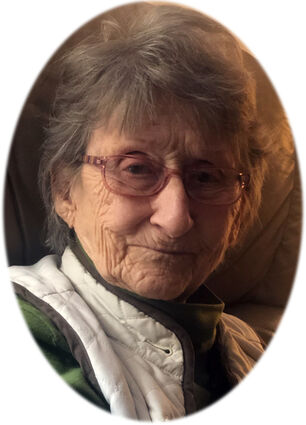 Our precious mother, LaDonna (Tade) Sauer, went to walk with the angels on Monday, April 4, 2022.

A graveside service will be held Tuesday, April 19, at 10:30 a.m. at Highland Cemetery, followed by a reception at the Cottonwood.

She was born on Sept. 29, 1932, to Edward and Lillian (Stroud) Tade in Ossette, Mont. She was the third of six children. She was raised in a farm family in eastern Montana where she attended Nashua School.

She met Simon Perter "Sam" Sauer and wed him on Oct. 6, 1951, at Queen of Angels Church in Nashua, Mont. With their adventurous spirits, they moved to Anchorage, Alaska, in the spring of 1952. While in Alaska, she worked at the post office for 10 years, was a house wife, earned her high school diploma at the age of 40, and received her real estate license and sold property. Her love for real estate and the stock market continued through the remainder of her life. They lived in Alaska for 25 years where they raised two children.

After her husband retired in 1976, they moved to Glasgow, Mont., to live their dream of farming. They farmed the Tade farm until Sam passed away in 1992. She stayed on the hill and farmed with her son, Jason, until 2007. For health reasons, she moved to Billing, Mont., in 2007 where she resided until her passing. She loved spending with her family and extended family. Her years of traveling to Arizona to spend time with her brothers and sisters were some of her favorite memories. She loved to play games and entertain guests at her home. She left us with many memories and great stories to share.

She was preceded in death by her parents, Edward and Lillian Tade; her husband, Sam Sauer; brothers, Edward Tade Jr. and Marvin Tade; and her sister, Helen Elkin.

In lieu of flowers, please donate to your favorite charity in her honor.