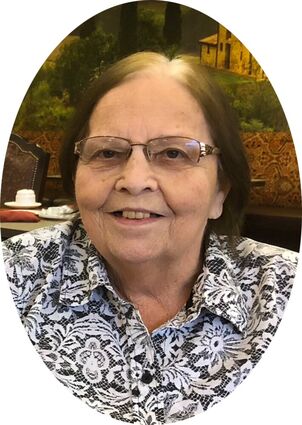 Funeral services will be held 11 a.m. Saturday, April 2, at EMB Church in Lustre, Mont., with Pastor Lee Button officiating. Burial will be in the EMB Church Cemetery.

Dorothy was born on March 11, 1937, in Chico, Calif., to Dormer and Adeline (Bogar) Glyshaw while her dad was in the Navy. They moved back to the farm in Vida, Mont., to farm and she went to school there. In the winter they lived in Billings, Mont., where she attended Billings Senior High and graduated. From there Dorothy went to Multnomah Bible College in Portland, Ore., where she met the love of her life.

Shortly after Alfred and Dorothy married in Billings at the Church of the Air on Sept. 4, 1959. They resided in Glasgow and Missoula for short periods of time and ended up back on the farm where Alfred's love for farming began. Their first son Perry was born, soon to be followed by Craig and their daughter Melenie. Dorothy was a wonderful homemaker and mother to her three children. She survived her children riding motorcycles, creating various motorized contraptions, basketball practices and games, 4H, horses, and so many more activities they were involved in. Always there and always the biggest cheerleader.

Dorothy was always involved in the EMB church with Ladies Aid, Sunday School or whatever were the needs of the church. Her best friend and neighbor, Carolyn Fauth, spent many days having coffee, working in the gardens, doing ceramics, sewing for 4H with her daughter Melenie and helping Carolyn deliver cakes. I don't think there was a day that they didn't call or talk to each other.

Memories she would talk about when she was young are riding the horses through the water and holding onto their tails with her sister. Her time in Billings and how she loved being in the big city. She loved being around people and doing things and always had the travel bug which Alfred and Dorothy would love to go on trips together. She was always ready to ride! Whether in the car, motorcycle, or airplane she was always ready. But a memory engrained in our hearts is how she read and studied her Bible. It could always be found next to her chair on the table.

Most of Dorothy's life was filled with illness due to rheumatoid arthritis which led to many other complications. Her husband was with her through the thick and thin of this illness her whole life. Their marriage vows were sacred and they both honored each other to the end. The longest time they were ever apart from each other was when God called Alfred home 49 days before Dorothy and she went to meet him in the arms of Jesus. Both Alfred and Dorothy were strong Christians and there was never a doubt where they are today. Heaven gained another angel and the singing and joy is beyond imagination.

Dorothy is survived by her son Perry Schmitt, his wife Darlene and sons Tom and Collin and his wife Mia and daughter Amelia; her son Craig Schmitt, his wife Lori and children Megan and Jacob; her daughter Melenie Stone, her husband Tony and sons Neeko and Daniel; as well as two great-grandchildren, Adessa and Braxson; sister, Barbara Ault, and husband Dave and nieces and nephews.