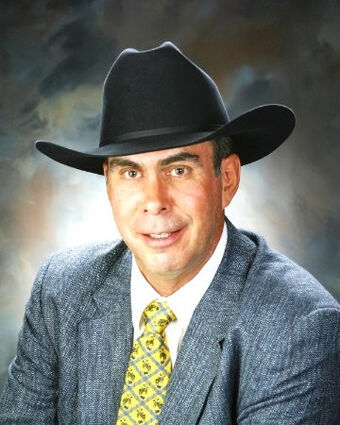 A memorial service will be held at a later date at Reitan Cemetery north of Saco, Mont., near the Fjeldheim homestead.

Bob's parents, Orville Fjeldheim and Gloria Braun Fjeldheim, met after WWII in Spokane. Orville and Gloria moved their young family to Glasgow, Mont., in 1953 to join Joe and Imelia Blazek to run the family-owned livestock company.

Bob's work ethic is legendary. As a youth he delivered newspapers on his bicycle through the wind, heat, and storms of eastern Montana. During his teenage years he rode his small motorcycle to and from Glasgow to work on the ranches of uncle Henry Halverson north of Saco, and the Etchart Ranch-South.

He also worked many long hours at Glasgow Livestock Sales Company alongside his younger brothers, Neil and Daryl, and his cousin Jim Blazek. By his late teens, Bob was a highly skilled cattle handler, and he remained widely respected within the cattle industry throughout his career.

Bob played the french horn in the GHS Scotty Band. In 1965 they recorded an album under director Gordon Wickham. During Bob's senior year he was often asked to direct the band for a song or two during halftime of basketball games.

Following graduation from GHS in 1968, Bob enrolled in Northern Montana College in Havre, Mont., where he met his wife, Annette. Bob became part owner-operator of Glasgow Livestock at age 25 following the untimely death of his father. He followed in his father's footsteps, successfully operating the family business through years of drought, recession, unstable livestock markets, medical struggles, fire, and floods for 17 years.

Bob moved to Billings in 1993 where he enjoyed a successful second career in real estate and right-of-way. Bob never lost his passion for the cattle industry, and loved doing business with the hard-working farmers and ranchers of eastern Montana and North Dakota. He remembered every face, every name, and every story shared with him during his long career.

When he wasn't working, Bob's favorite places were on the water and in the sky. He was an avid walleye fisherman, and loved nothing more than having a line in the water at Fort Peck Lake, especially with his children and grandchildren. He was also a skilled pilot. When his kids were growing up, it wasn't uncommon to hop in one of several small airplanes he owned over the years to travel to a swim meet or summer camp.

Bob was a lifelong learner. He read mountains of books, and wrote and published two books under a pen name. Just a few months before his passing, Bob took courses in Ham radio and passed his first-level certification. He was an avid gun collector and loved sport shooting. It was very important to him that his grandkids learned how to be safe, responsible gun owners, and he dedicated many hours to teaching them on the shooting range.

Bob loved history, particularly aviation history. He was very proud of his father's service as a "Burma Bridge Buster" bomber pilot in WWII. He knew every make and model of airplane, and could recognize them from the ground by the sound of their engine. Some of his most treasured memories included a visit to the Historic Air Museum in Tillamook, Ore., and a ride with his daughter and grandson on a B-25 bomber.

Despite numerous medical challenges and the ups and downs of a full life, Bob never lost his sense of optimism. Regardless of how he was feeling, if you asked Bob how he was doing, he always gave his signature response: "Never had it so good." Bob was a deeply spiritual man, and proudly embraced the 12 principles of AA. During his lifetime he quietly donated thousands of dollars to numerous causes close to his heart, especially wounded veterans and various children's charities. Bob was a lifelong Lutheran, and a very proud American.

His grandchildren were the love of his life, and every moment spent with them was a treasure. Bob loved volunteering in his grandchildren's classroom, teaching them to shoot and fish, taking his kids and grandkids out to lunch, and attending their sports and special events. He was the ultimate "superfan," and attended a grandson's basketball game just a few days prior to his death.

In lieu of flowers, donations can be made in Bob's name to the Disabled American Veterans.