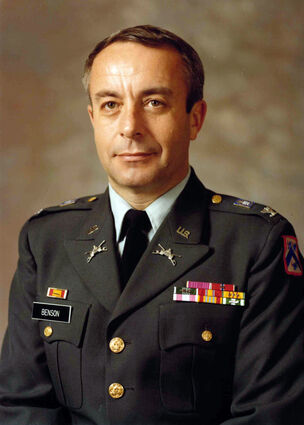 A graveside service will be held at a later date.

He was born June 23, 1937, in Billings, Mont., to Eugene and Mildred (Yandell) Benson. Rick was a true son of Montana graduating from Glasgow High School in 1955, playing football and earning his Eagle Scout. Rick attended University of Montana, where he was a Phi Delta Theta brother and Army ROTC cadet, while spending summers working on the Fort Peck Dam as a pipelayer. Rick earned a history degree and, more importantly, met his future wife, Shiela LaChambre, during his Griz days. They were married in 1958 in Polson, Mont.

Rick was commissioned into the U.S. Army as an armor officer, serving multiple tours in Cold War Germany and Vietnam. He commanded tank units from platoon to battalion level. While at the Command & General Staff College, Rick earned a graduate degree in Military History. As a senior military leader, he served as the Class Director of the Command & General Staff College and the Chief of Staff for the 4th ROTC Region. He retired from the Army in 1988, having served 30 years on active duty in the service of his Nation.

Retiring to Bozeman, Rick became a dedicated fly-fishing angler and fly tyer, and loved fishing the Gallatin River. He earned a graduate degree in mental health counseling from Montana State University. He and Shiela loved exploring Hyalite Canyon and Yellowstone National Park together. Rick became involved in Quiet Waters for Wounded Warriors and the Exchange Club, where he served as the club's president. Later, Rick became a passionate volunteer with the Gallatin Historical Society and served as their president.

Rick is preceded in death by his wife, Shiela Frances (LaChambre) Benson; and brother, Larry Benson.

Arrangements are in the care of Dokken-Nelson Funeral Services. http://www.dokkennelson.com.