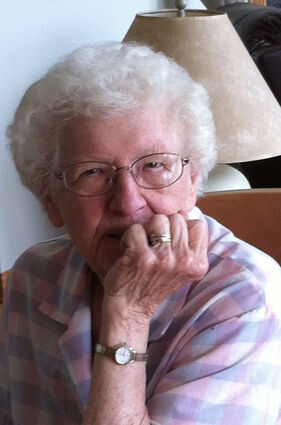 Dorothy Barton, 92, peacefully passed away on February 6 with her daughters and sons-in-law by her side. Her kindness, generosity, sense of humor, and faith and trust in Jesus were as evident in her passing as they were in her daily life.

Funeral services were held Feb. 12 at the Saco Methodist Church.

Dorothy was born in Crystal Lake, Illinois, on March 1, 1929 to Charles and Mabel Schroeder and raised on a dairy farm with her beloved sisters, Marion, Alice, and Marjorie. She graduated from Crystal Lake High School and Ellis Business School.

Dorothy met her husband, John Barton, through a bet he made with Jack Woods, a local insurance salesman and friend. Jack tried to sell Dad a life insurance policy and Dad said he would purchase one if he were a family man.  He bet Jack a cup of coffee that he would not be able to produce the name and address of one single woman. Having met Dorothy on an earlier trip to Illinois, Jack wrote down Mom's address. Mom received John's first letter and was smitten by his way with words and sense of humor. The rest is history.

John and Dorothy were married on October 24, 1959, in Crystal Lake after which she came to the ranch "in the middle of nowhere" for the first time.  This became home where they raised their daughters - Lisa, Cheryl and Valerie. Mom had a wonderful sense of humor, and was devoted to her family.  She stayed busy and started the Rocky Road 4-H club, sold Tupperware, and organized an exotic breeds cattle sale.

Even after John passed, Dorothy loved to host hunters.  In October 2019, she was flying from Illinois to Montana with her sister, Marge, to go to the ranch for hunting season. While on the flight, she had an episode that required CPR from a doctor who was onboard.  But this didn't faze mom... The next day she headed to the ranch and told her doctor to just call her with the test results about her heart.  She wanted to spend her last hunting season with her nephews, Steve and Bill Behm, and friends - Dave and Karl Wirth, George Giordano, Monte Roy, and others.   Mom faced life's challenges such as a ranch fire almost burning down the house, a microburst destroying a trailer house used for storage of valuables, rolling her Ford Explorer into a ditch and being in poor health this past year with courage, practicality and without complaint.  She was always so thankful for the help of her neighbors and friends during those times.

She was preceded in death by her beloved husband, John, stepson Cody Kyrobie, sisters Marion Rittmeyer and Alice Behm.