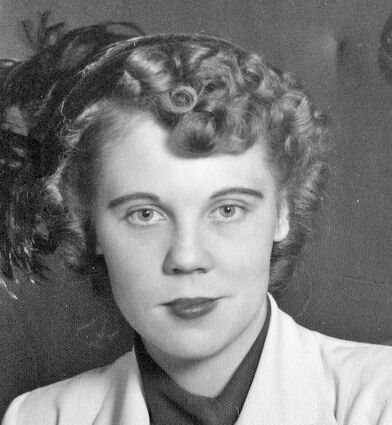 One thing is for sure...Betty would not have wanted to make a big fuss! Yet, she was worthy of it.

Betty's favorite thing in all the world was to share. She simply loved to share. It is what made her happiest. Now with sadness and joy in our hearts, we will share Betty with her heavenly family. Betty Jean OTremba, born on July 18, 1930, passed away peacefully on January 6th, 2022, at the age of 91. She had been a resident of Logan Health Extended Care (previously Pondera Medical Extended Care) in Conrad, where she was lovingly cared for since April 2016.

Betty was born to Burr and Mamie Barnes and had ten siblings. She grew up in the Wiota Valley, near Nashua, MT.

Betty married Harvey OTremba on September 15, 1951, in Wolf Point at the Immaculate Conception Church. They lived in Frazer, MT where Betty worked in the accounting department of Martin Lien's Department Store until 1955 when she and Harvey purchased and operated a ranch in Wiota Valley. Along with successfully raising six children, she helped raise pigs, chickens, cattle, horses, cats, dogs, and a talking Magpie. She grew many a huge garden and had an orchard filled with chokecherry trees. Consequently, she made the best chokecherry jelly in all of Valley County, perhaps beyond. We are not certain of that.

Betty and her family were members of the Queen of Angels Parish in Nashua where Betty was an active member of the Altar Society.

When Betty and Harvey retired, they spent a year traveling the United States in their fifth wheeler, and eventually settled in Sequim, WA. They were active members of the St. Joseph Catholic Parish, where Betty was a member of the Catholic Ladies Auxiliary. Shortly after moving to Sequim, Betty earned a Certified Nurse's Aide license and worked as a CNA for the Fifth Avenue Nursing Home. Later, Betty and Harvey became Managers for the Fifth Avenue Retirement Center.

Betty became a painter after her stroke in 2016 and surprised her family with some awesome paintings.

She was preceded in death by her parents; 10 siblings; her husband, Harvey; and her grandchild, Cassandra OTremba McCann.

Above all else Betty lived her faith every day. She was completely devoted to God, her family, and friends. When Betty said, "I'll pray for you", you absolutely knew she meant it. She was witty, and humorous, kind, generous, and gentle. She was love in action... and she is loved.

Funeral Services will be held at 11:00am on May 7th at St. Michaels Catholic Parish in Conrad, with a reception to follow.