'I'm Dreaming of a White Christmas' 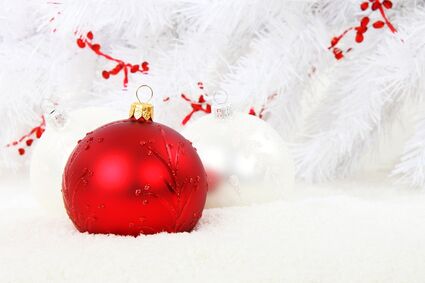 Growing up in the desert sands of Arizona, there was no such thing as a "white Christmas." One particular Dec. 25 within the last decade or so was in the upper 80s or lower 90s. That was a strange and hot day.

The only "snow" we ever got was from a wealthy family living down in the valley who imported tons of shaved ice to their property once a year and invited area kids to come and sled and play. Now, I live in opposite land.

As I write this, it is a balmy 14 degrees outside, according to the bank sign across the street. And, there was a small bit of snow in the late afternoon. For the first time in my life, I am waking up to temperatures below freezing. When once I found anything under about 50 degrees to be cold, I now consider 28 and above as warm, especially if there is no wind.

My how my perspective has changed.

Back in sunny Arizona, driving somewhere was a completely different chore. There, the idea was to find the shadiest spot to park. Here, hopefully somewhere that catches a few rays to help melt the glaciers on my windshield.

There, I kept the windows cracked to counter the "greenhouse effect," which could lead to temps above 140 degrees in the car. Don't touch that metal seatbelt with bare skin! That will surely brand you like a cow. Here, All the windows are up and I am amazed the pepsi I left in the center console is frozen solid.

There, no ice on the roads or slippin' and slidin' all over the lanes. Here, in a rear-two-wheel-drive-sedan, fishtail city.

Still, the cold isn't as bad as I thought. At least not yet.

I have now experienced -10 mornings when my car starter had to work overtime to turn the engine over. Also, the thrill of scraping ice off the windshield and falling on my butt on the ice on the sidewalk.

I put on extra layers and avoid the outside. Not too different from Arizona where I put on fewer layers, and avoided the outside.

This all made me think of how resilient humans are. Either extreme heat or extreme could can kill. I am not sure which I would prefer, but probably death to cold. Overheating to death just sounds awful. Going numb and falling asleep, not so bad.

Not that I am in any hurry either way.

But the thought that humans can survive and thrive in either environment, proper gear available, is awesome.

So what's left on my extreme environments to live in list? Swamp and jungle. Not in any hurry for either of those either. They are full of nasty little critters and diseases I would rather avoid.

Anyway, I am glad it is a white Christmas this year. It makes it feel more like, well, Christmas. Much more, for sure, than a 90 degree day with blowing sand.