GMS Art Club Has a Blast with Local Cops 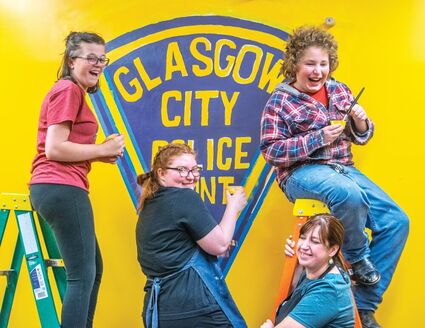 Anika Smith, from left, Gracie Baker, Libby Weber and Mason Androwschappauga laughed and smiled as they worked on the GPD mural.

The Glasgow Middle School (GMS) Art Club has been busy placing the final touches on a new mural in the Glasgow Police Department Squad Room.

"We like to do a community service project every year," said Libby Weber, arts teacher at GMS. "This is our way of getting out. Josh Nolan contacted me about this, and we have been having a lot of fun."

The mural is of the GPD patch, in yellow and blue.

"I think it is really cool, because we get to do something together that will be here for a long, long time," said Annika Smith, GMS 8th Grader. "It is cool to get to be a part of that."

"I really like art club because I get to paint, plus I can do stuff I couldn't do in Iowa," he said.

Gracie Baker, also a member of the art club, said the group was having a wonderful time hanging out with the police and working on the mural.

"I thought it would be a little boring, but it is actually a lot of fun," she said. "We are laughing a lot more than we probably should."

Officer Scott Campbell, a new patrolman at GPD, stayed with the art club as they worked on the mural.

"I got to come in and supervise today and make sure they don't paint the department the wrong colors, or anything," Campbell joked. "This is their second day here. They did the rough stuff on it a couple of weeks ago and now they are coming in to clean it up and put some finishing touches on it. It has been pretty cool to watch."

Campbell recently joined GPD, and was pleased to participate in such activities.

"I was hoping there would be stuff like this, because I was hoping to get the kids and community involved in police work," he said. "This puts the police department in a positive light, so everyone has the opportunity to see us as regular people. We are not cops they need to be scared of. I think having kids have positive interactions with police when they are younger is great for the rest of their lives. I think this is a great project."