Going to the Movies 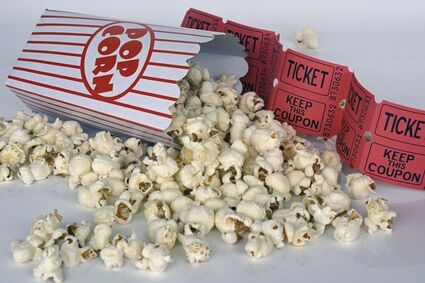 For the first time since the COVID-19 pandemic began, I decided it was high time to see a movie the way they are intended to be seen - in a movie theater.

So, on a recent Friday night, I took my son Austin over to Valley Cinemas in downtown Glasgow to watch "Ghostbusters: Afterlife." I will give a review on that movie later in the column.

First thing to know if you have never been to the Valley Cinemas before, take cash. They don't except debit or credit cards.

Second, there is plenty of elbow room to be had - space for that big bag of buttered popcorn and ice cold beverage. When we went, I had expected a larger crowd of folks - it was a Friday night - but there may have been only six or so others in the theater room. I suspect this is because of the pandemic. People may not yet feel comfortable in a movie theater, which is unfortunate. The place is clean and well ventilated.

I feel for the movie theater industry, as they face a similar dilemma as newspapers. Both of us are old school media somewhat displaced by television and the Internet. It is quite convenient to have content streamed directly to your big screen TV. You don't have to go anywhere,

Still, theaters are superior. You just can't beat that giant screen, surround sound and all of the social traditions that come with going to the movies.

If you haven't gone to see a movie lately at the theater, I highly recommend it. Valley Cinemas is a great little place for Glasgow.

Now, to the movie review.

After watching "Ghostbusters: Answer the Call" back in 2016, I was seriously concerned this new movie would be equally as terrible. That movie was so bad I had to look up the title on IMDB because I had forgotten!

Well, my concerns were not justified. "Afterlife" delivered on all the areas where "Answer the Call" failed.

I have been a Ghostbusters fan since I was a wee lad back in the 1980s. The original "Ghostbusters" came out in 1984 and I watched it all the time on VHS. Yes, that was a thing.

The ghost scene at the beginning of the movie in the library haunted my young boy dreams for many years.

When I was five, Ghostbusters II came out. I liked it too. And, there was the TV cartoon series. I was a big fan and had a toy sized version of "Ecto-1" and the converted fire station to play with. Even figurines whose proton blasters shot little orange darts, and some ghost goo to boot. Good times.

"Afterlife" succeeded where "Answer the Call" failed because the movie was a "soft boot" of the original 1984 movie. It had plenty of fan service, which I will not go into because I abhor spoilers.

The movie treated Harold Ramis, who portrayed "Egon" in the original two movies, with great respect and gave the actor and his character the honor they deserved. Ramis died back in 2014, which seemed to signal the death of any chance of a true Ghostbusters III being made.

"Afterlife" has a good cast and has plenty of potential for a sequel. If you saw the clips following the credits, they setup a new problem back in New York City based on the events of "Ghostbusters II."

I hope such a sequel happens, and that it is equally as good or better than the current film.

The movie did have a few shortcomings, but nothing nearly as bad as "Answer the Call."

I give both the movie and Valley Cinemas a big thumbs up.