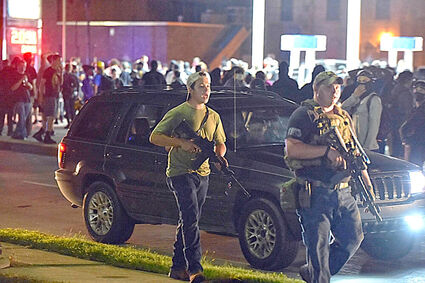 Kyle Rittenhouse, who was acquitted recently of five charges after killing two men and wounding a third in August 2020 with a sporting rifle during riots in Kenosha, Wisconsin.

Does the acquittal of Kyle Rittenhouse, who was accused of murdering two men and wounding another at a protest in Kenosha, Wisconsin, broaden the way for Americans to take the law into their own hands?

Can individual Americans, by claiming that they felt their life was in danger become judge, jury, and executioner and not worry unduly about the consequences?

This raises a question, if the law is a matter of personal interpretation, who can you trust?

Imperfect as it is, the American legal system at least spells out what a citizen can expect when dealing with the law; there are only certain qualified people who can arrest you, charge you with a crime, try you, represent you, and sentence you.

Fair or not, at least it's all spelled out. In a vigilante culture it's not at all clear who is on your side; there are no badges, no uniforms, no due process-in fact, no process at all-and the unwritten rules can change in the middle of the game.

The need and desire for laws is exemplified by the early mining camps in Montana and elsewhere.

Although territories were subject to the territorial laws of the United States there was little enforcement-indeed, there were few people available to enforce it.

Having a mutual desire to protect their mining claims and prevent claim-jumping local miners formed associations, elected officials, and wrote laws governing the issues that they were concerned with. If "nature abhors a vacuum" then it follows that society demands rules to follow, or at least rules that other people should follow.

The history of Montana itself includes a vigilante movement which got rid of a crooked Sheriff named Henry Plummer, the Sheriff of Bannack, now in Montana, but then in Idaho Territory.

Plummer was suspected of heading a group of robbers and murderers known as "The Innocents."

In response to this suspicion a group of men led by Wilbur Fiske Sanders established a Vigilance Committee which took the law and their interpretation thereof into their own hands and summarily tried and executed Plummer.

They then conducted a campaign to rid the territory of others who were suspected, and in most cases guilty, of crimes.

In the trials of the accused, such as they were, the verdicts were often dictated more by emotion and peer pressure to convict than by evidence, and that's a major flaw in vigilante justice.

The legal process, dry as it may seem, is dry on purpose in order to remove or minimize the emotional element in deciding a verdict.

We do not get to pick and choose which laws to obey or dis-obey, that's decided by our society as a whole.

So, back to the basic question, "who can you trust?"

For my money it is more important to be able to trust people who are elected to positions in law enforcement and entitled to wear a badge.

They are not always perfect and not always competent and sometimes-rarely-not even honest, but there is a written code of standards that they are subject to and must answer to when they violate that code.

Self-declared "guardians of justice" are bound by no rules other than the rule of force, and how they wish to interpret it.

Jim Elliott served sixteen years in the Montana Legislature as a state representative and state senator. He lives on his ranch in Trout Creek.