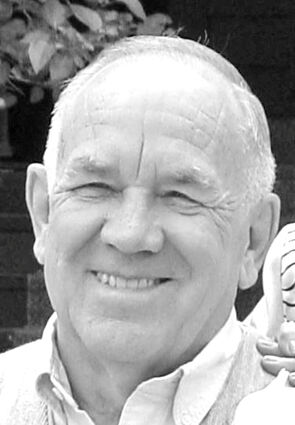 Wayne lived in the Glasgow & Fort Peck area all of his life. Wayne went to Kindergarten & 1st Grade in Glasgow, then while living with his grandparents Clifford & Lucile Doke at Fort Peck he attended 2nd through 8th grade. He played basketball in Fort Peck among other activities. Wayne then attended Glasgow High School, graduating in 1955. At 17 he joined the National Guard and remained active with them for 9 years. In high school he was also active in FFA & raising his own livestock. He spent summers staying and working with his uncle Floyd Doke and family & his Uncle Brown Doke working cattle north of Jordan. He then started with construction work for Ross Contracting, Vertz Brothers Plumbing, Elmer Johnson Plumbing & Heating and a short time in Havre working in the plumbing field. Then in 1970 he and Mary Ann started their own plumbing & heating shop (Dale Plumbing & Heating) selling in 1999 to his son's Stephen & Mike Dale.

Wayne married Mary Ann Stahl in 1955 and to this union there were 4 sons born over the years. Wayne & Mary Ann kept busy following the sports activities that their sons & grandchildren were involved in over the years. Wayne was very supportive to the community in which he grew up and lived in. He served as President of the Montana Association of Plumbing Contractors, President of the Valley County Ridgerunners Saddle Club, President of Glasgow Chamber of Commerce, Member of the City Recreation Board & member of the Masonic organizations. Wayne was a Licensed Master Plumber with the State of Montana for 51 years.

Wayne is proceeded in death by his grandparents who raised him, parents, great-grandson Lane, and great-great-grandson, Kobe.

Orville, Wayne can come out and play now.

Wayne's family will receive friends from 5-7 p.m. on Friday, November 26 at Bell Mortuary. Funeral services will start at 11 a.m. on Saturday, November 27 at the Glasgow Evangelical Church. Burial will follow in Highland Cemetery. Friends are invited to join the family at the Cottonwood Inn following the burial for a luncheon and time of sharing.