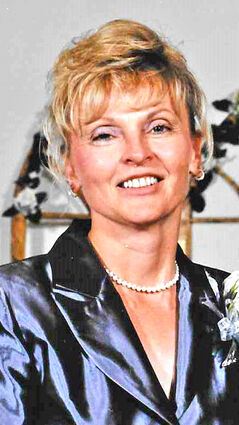 Jerilyn Sue Schmidt Reddig, 63, of Lustre, Montana went to be with her Lord and Savior on Friday, November 5, 2021, at the Billings Clinic of Billings, Montana. Jeri was born in Wolf Point, Montana on July 22, 1958 to Paul and Lila Schmidt. She joined four older sisters and they became known as the five J's.

Jeri was active in her high school years, participating in choir, basketball, track and an award winning cheerleading squad and being the Salutatorian of her graduating class of 1976. After high school, she attended Bethel College in St. Paul, Minnesota. Shortly after she moved back to Lustre to marry her high school sweetheart, Ron Reddig, on December 30, 1976. They celebrated 44 years of marriage. Together they raised three children, a son, Randal, and two daughters, Nicole and Roni.

Together they lived in Lustre, Montana working on the farm/ranch. At this point of her life, Jeri along with Ron started driving one of the local school district bus routes. Jeri drove the bus at different times of her life totaling 27 years. Her goal each day was to make sure her riders knew how special they each were. There came a point when she had to quit doing this job she loved so much because of the progression of her Multiple Sclerosis she was diagnosed with in May of 1992. She was active in the church teaching Sunday School, working in WMS and even being custodian for numerous years. Jeri was the welcoming face while working as the secretary and treasurer for the local community AWANA program. While doing this she challenged herself to learn verses like the children. Since Ron was the basketball coach at the high school, she became the designated scorekeeper which she enjoyed immensely. When her children got older she could be found in any of the small towns in northeast Montana, driving one of her children to some sort of sporting event. Jeri enjoyed all the miles that this job required and was her children's biggest fan.

Jeri lived the rest of her life dealing with the limitations of her MS, always trying, never complaining about the daily limitations she experienced. This didn't deter her from still being the life of the party and greeting everyone she met with a smile and friendly conversation.

She is preceded in death by her parents and grandson, Blake Lucas Reddig.

A private family burial was held on November 6, 2021 at the Lustre MB cemetery. A celebration of life will be held in 2022.