Glasgow Upsets Fairfield 32-22 on the Gridiron 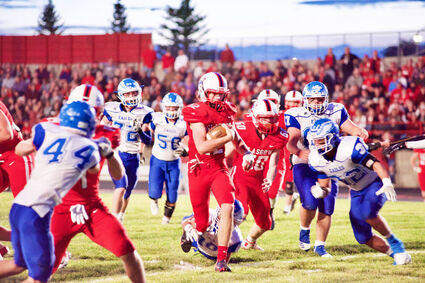 Glasgow quarterback Mason Donaldson runs the football, scoring the tying touchdown in the third quarter of the Scotties' 32-22 upset victory over the Fairview Eagles Oct. 1.

Friday night, in front of a packed house celebrating Homecoming, the Glasgow Scotties played the game of their season so far – upsetting the Fairfield Eagles 32-22.

Glasgow, in their first ever regular season win over Fairfield, snapped the Eagles' 48-game conference winning streak in an action-packed game. "Any win's a big win," said Scottie head coach Patrick Barnett, "but when it's against Fairfield, it's even bigger."

Fairfield came to town favored in the game, but Glasgow made clear – on the very first play of the game – they were on the field to win.

The Eagles kicked off to start the clock, but Glasgow started the game when KJ Ingram returned that kick 75 yards to put the Scotties' first touchdown on the scoreboard a mere 14 seconds in. Kyler Hallock ran the ball in for the two-point conversion and an 8-point Scottie lead.

Ingram said, "Running the kick off back was a really cool experience for me. It was our homecoming game against the second-ranked team in the state and I think really set the tone for the rest of the game. It was awesome to put points on the board that quickly."

Fairfield wasted little time in answering when quarterback Cooper Christensen connected with Kayson Brown for a 32-yard touchdown reception. Miguel Perez ran the ball for the two-point conversion and tied the game at 8 a piece.

Undeterred Glasgow, under the helm of quarterback Mason Donaldson, pressed on with their game plan.

With 7:28 remaining in the first quarter, Tatum Hansen carried the ball across the goal line for the boys in red. He increased Glasgow's lead by two with a successful conversion attempt. Just over two minutes later, the Eagles' Christensen held on to the ball and carried it one yard over the goal line for Fairfield's second touchdown. The Scottie defensive line shut down the two-point attempt for a 16-14 hometown lead that would persevere into the second quarter.

Early in the second, Fairfield would claim the lead over Glasgow when Perez scored on a 7-yard run and the two-point attempt. The Eagles took the 22-16 lead into halftime due in part to a huge interception by freshman Wyatt Babb at the end of the half.

The Scotties returned to the turf down, but certainly not out. Glasgow's offensive line created a huge hole in the Eagles' defense at 7:35 in the third quarter, allowing Donaldson to carry the ball 7 yards into the end zone. Hansen's two-point conversion put the Scotties ahead, where they would stay for the remainder of the game. Donaldson praised Glasgow's teamwork as key to the win, "Everyone stepped up and made big plays when we needed one. Even when we were playing from behind there was no quit." Hansen credited Scottie fans with motivating the team. "We had a huge crowd and they continued to cheer and be loud throughout the whole game," he said. "This helped us to push through the fatigue and keep gutting out big plays as the game went on."

Trey Johnson sealed the deal offensively with 43 seconds remaining in the third with a 5-yard touchdown reception. The Scotties turned to Hallock for the two-point attempt. Hallock barreled his way across the goal line, giving Glasgow a perfect record on two-point attempts in the game. "To be down at halftime against one of the best teams in the state and have the confidence to come back out and win the game is pretty darn cool," said assistant coach/offensive coordinator Dylan Hughes.

Firmly in control of the game, the Scottie defense held strong through the fourth quarter, denying the Eagles any return trips to their end zone. Beau Malnaa and Toryn Richards both snagged interceptions late in the game for Glasgow.

Ingram enthused, "Watching all the successes of my teammates – Mo and Trey's catches, the runs that Kyler and Tatum had and the three interceptions our defense pulled off – it was a complete team effort."

Glasgow's offense tallied 333 total yards in the game – 204 rushing and 129 passing. Hallock amassed 94 yards on 21 carries and Hansen had 88 yards over 15 carries. Donaldson added 22 yards on six carries. Trey Johnson had four receptions for 69 yards while Mo Fast added 60 yards receiving on three receptions. Donaldson connected on 7 of 14 throws with one touchdown and no interceptions.

The Scottie defense allowed 154 yards. Ethan Nickels led the Scotties in tackles with 10, including two tackles for loss. Fast, Johnson and Richards each added six tackles. Two of Johnson's resulted in lost yards for Fairview. Hallock had five tackles, three for loss. Babb and Ashton Potter were each credited with a pass break up.

Nickels, who has consistently helped lead Glasgow's defensive line in tackles this season, was pleased with his team's win over Fairfield, saying it now tops his list of best moments in the season. Looking ahead he said, "I hope we can keep the momentum going into upcoming games. A major part of the reason that we've been so successful is because of all the great coaches we have. They always push us to better individually and as a team." Echoing him was Donaldson, "Also, our coaches had us well prepared for this game," and Ingram, "They put so much of their free time into watching the other teams' film and teaching us how to play against it, and they always make sure our players are healthy and prepared."

Johnson, with huge plays on both sides of the football was named the recipient of the Norm Thompson Award, given to the player of the homecoming game. The co-captain, who expected Fairfield to bring out the best in the Scotties, said, "My favorite part of the game by far was the Victory Formation to end the game. It's one of the best feelings in the world to remind a team what defeat is."

His co-captain Hallock savored the win as well. "My favorite part was ultimately winning. It was one of the best feelings in the world to snap their streak," he said. "I told my teammates all week that we can do this, we gotta go into this game thinking we can win. To the fans I just want to say how proud I am of our team. Everyone did everything right."

Barnett said both his offense and defense came through in this game. "Defense played well and then there were those big passing completion plays which really helped us out," he said. "We've struggled with our passing game in the past years ... and those guys stepped up in big moments and scored touchdowns and big first downs. They moved the ball quite a ways down the field for us." 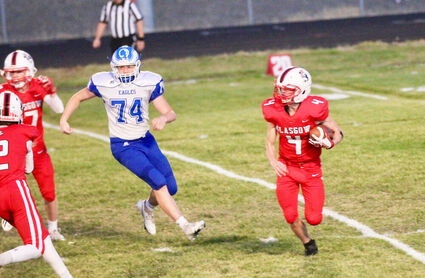 Glasgow's KJ Ingram (#4) returns the opening kick off 75 yards to put Glasgow on the scoreboard first against the Fairview Eagles Oct. 1. The Scotties defeated the second-ranked Eagles for Homecoming 32-22.

"I thought our offensive line worked their tails off and played an outstanding game. They gave us the ability to stay balanced between the pass and the run" said Hughes. "Mason threw the ball pretty well, and Kyler and Tatum took care of business running the ball as usual Trey and Mo had a couple of huge catches to really keep the momentum going." He added, " These young men are just a privilege to coach and to have the community come out and support us the way they did was amazing."

On the other side of the field, Barnett noted his team is sitting at roughly 21 forced turnovers on the season which is in record-setting territory for the Scotties.

The Scotties travel to Conrad this Friday, Oct. 8 to play the Cowboys at 7 p.m. The game will be carried live on the NFHS Network and KLTZ.