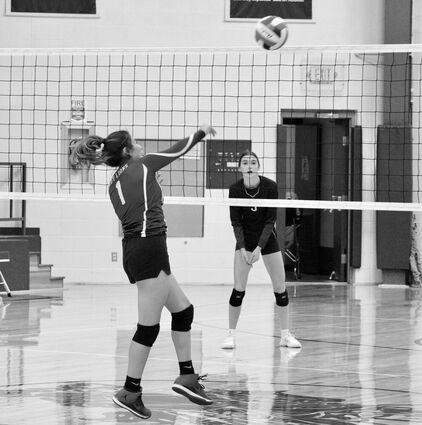 Lustre Christian's Doven Birdbill sends the ball over the net during the Lions match against the North Country Mavericks Sept. 24 in Hinsdale.

The Lustre Christian Lions volleyball team earned a win when the team hit the court on Tuesday against the Frazer Bearcubs on Tuesday of last week. Lustre won the match against Frazer in three sets 25-21, 25-13, 25-10.

"We lost all three games, best two-out-of-three, but it was a good experience for the girls to get out and have another tournament-like day," said head coach Madison Neufeld. "The girls have been improving every game still and really got a confidence boost after our win on Tuesday against Frazer."

The Lions were scheduled to play Fairview on Tuesday, Oct. 5. Lustre Christian will play host to Richey/Lambert this Saturday, Oct. 9, pending their opponents being released from quarantine.