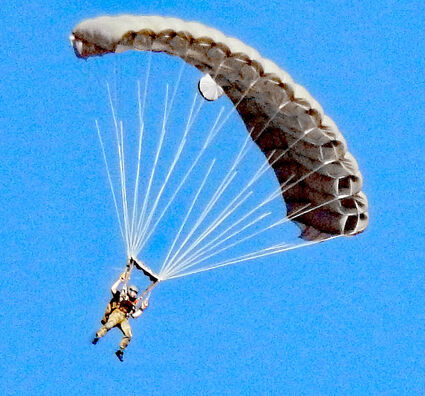 Photo Courtesy a Flock of Birdies

A paratrooper descends into the St. Marie area recently during military exercies.

St. Marie residents last week woke up to a movie scene straight out of "Red Dawn" as paratroopers descended from the skies during exercises at the old Glasgow Air Force Base facility.

No, it wasn't red communists surreptitiously carrying out an invasion of heartland America.

Instead, it was a troop of U.S. military personnel in town for exercises at the near abandoned base, currently managed by Montana Air Research Company (MARCO), an affiliate of Boeing.

MARCO refused to comment on the ongoing training, and emails to the Boeing press team were ignored.

The Courier began sniffing around for more information about the seemingly secret affair after receiving an email from the Glasgow Chamber of Commerce and Agriculture, Inc., on Sept. 21. According to the email, military personnel began training at MARCO in St. Marie starting Sept. 27 and spanning through Oct. 7. The chamber estimated about 105 people affiliated with the exercises were registered as guests during the training period, with additional guests likely in connection with sub-contractors indirectly involved in the exercises.

The chamber rightly anticipated an uptick in area businesses being patronized by the welcome visitors, and there were several sightings of troopers in fatigues frequenting Flip's for a delicious bacon cheeseburger or ice cold dessert.

Such trips to Valley County by the military for exercises should be a cause for celebration in this community, whose economy has been hard hit by the COVID-19 pandemic.

So why the silence from Boeing and the USAF? The cat was out of the bag weeks ago, and especially when troopers by the score were seen jumping out of a military jet at St. Marie. (The Courier has viewed credible photos of the jumpers mid-air).

I find it strange a veil has been cast in attempt to stave off media coverage. Perhaps it is an Air Force thing?

I say that because I have covered military events for all other branches of the military (minus Space Force) in three separate states for various newspapers. Working with the Navy, Army, Marines and Coast Guard was easy. Their public information officers were generally responsive to media inquiries, and they often welcomed publicity, especially in my home town where there is both an army base and a Marine Corps base.

Sure, there is always taught security, as there should be, but a press badge and a public information officer is all that is really required to get on to bases and glean info for the public.

One example of some of my past stories dealing with the military includes one about trying out the U.S. Army John F. Kennedy Special Warfare Center and School at Yuma Proving Ground. The instructors put me in a skydiving suit and led me into a state of the art tube designed to simulate free fall during skydiving operations: (https://www.yumasun.com/news/blown-away-yuma-sun-reporter-and-photographer-free-fall-in-vertical-wind-tunnel-at-ypg/article_306751a6-84c0-11e3-9b57-001a4bcf6878.html).

In that case, the press was granted access to a highly sensitive training facility as a public service to the local community. This is an example of how media interactions with the military should go. Recent attempts to talk to the Air Force are an example of how they should not.

Seriously, I personally am all for the military conducting training here. 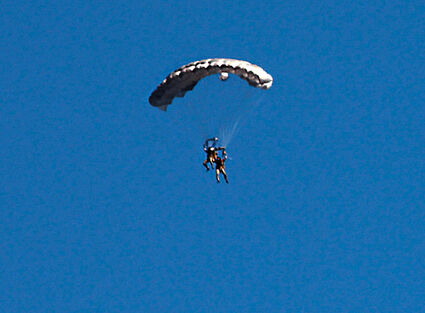 Photo Courtesy a Flock of Birdies

Number one, it is good for national security, and number two, it is great for the local economy. It is a win-win, and I hope whoever is in charge of public affairs at Boeing or the Air Force realize they are quite welcome in Valley County.

What I am not for is private citizenry in St. Marie being hassled on public property for taking photos of this not-so-secret military exercise (The Courier has confirmed this indeed happened to a flock of "little birdies" up there). Such actions are quite literally against the Bill of Rights, and are looked upon by this newspaper with great disdain.

Transparency is the order of the day. You know, unless they are hiding little green men up there in the nuclear silos. Keep that to yourself, Uncle Sam.