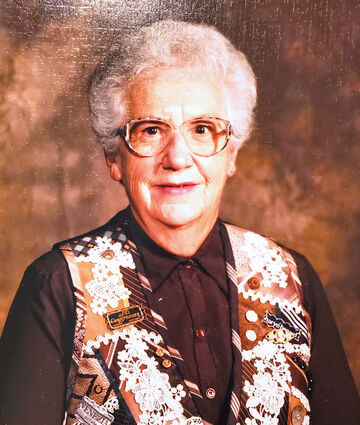 Constance "Connie" Terry left this world on the evening of Sept. 22, 202,1 at home, surrounded by her family.

Her passing was peaceful.

Those that knew her were blessed and she will be forever missed.

Connie Terry first blessed this world in the early morning of July 17, 1926.

She was the second child of Frank Arthur and Marjorie (Frow) Whitmus. The family later increased in size to a total of 11 children.

The family farmed the homestead near Vida, Montana. They were a family of the depression. Poor in cash but rich in love. Connie loved that time growing up on the farm with her parents and the lively crew of brothers and sisters. They were full of mischief, laughter, and life.

Connie graduated from Circle High School and went on to work in Wolf Point.

As an employee of First State Bank in Wolf Point, she met and married Peyton H. Terry in 1950. A team to be reckoned with was formed. They worked together in all aspects of their lives.

Peyton was the mover and shaker and Connie was the anchor that kept the family organized and together.

Early in their marriage they relocated from Wolf Point to Glasgow.

In Glasgow, Connie and Peyton owned Terry Chevrolet Buick, the Servant Theater (later named Terry's II Theater), two Drive-in Theaters and a video store. Connie kept the books for all of the businesses, and everything had to balance to the penny.

Connie and Peyton had three children Cheryl, Paula and Joel. Losing Joel as a young adult was heartbreaking for a woman that valued and lived for her family.

Connie was a great cook, seamstress, mother, daughter and sister.

Over the years she made over 50 quilts to give away to the employees, nieces, and nephews when they had milestones in their lives. She loved to dance, laugh, the Utah Jazz, her neighbors, blackberry brandy, her children, grandchildren, brothers and sisters, and a multitude of caregivers that assisted her the last 18 months of her life.

Connie was preceded in death by her parents, brother Lloyd, sister Helen, husband Peyton, and son Joel. She is survived by her daughters Cheryl and Paula, her grandchildren Keeton, Teagan, Isabella, Rose and Elizabeth and one dear great grandchild, Tylee Marie. She has numerous nieces and nephews as well as her caregivers that she valued as if they were her own.

Services will be at 11 a.m. Tuesday, Sept. 28 at Grace United Methodist Church in Billings, with a light lunch to follow afterwards.

Masks are required with contact tracing at the Church also.

Live streaming will be available for those that are unable to attend but want to celebrate Connie's life at the following website (https://www.graceumcbillings.org).

Memorials can be made to Milk River Activity Center (Glasgow, MT) or an organization of your choice.