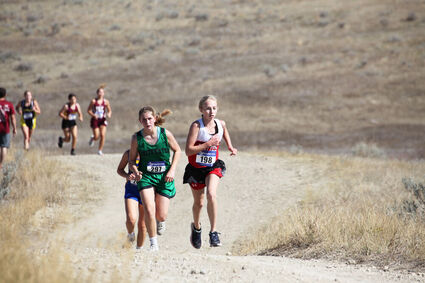 Caylen Jankowski / For The Courier

Glasgow placed five runners in the top ten in Poplar, led by freshman Kyler Holinde. He placed fourth with a time of 18:33.95. "Our cross country meet went good this weekend," he said, "and the highlight is that we came first as a team." He went on to add, "I am glad to see our team chemistry is really good and are putting forth the effort to be competitive." 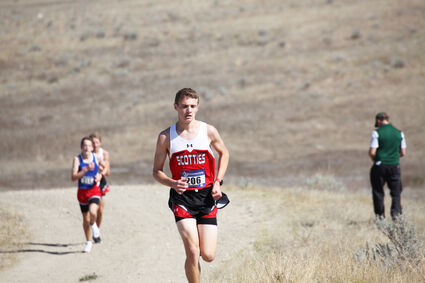 Kimber Dulaney / For The Courier

Freshman Kyler Holinde near the lead at the 1-mile mark at the Poplar Invitational Sept. 4.

Iris McKean, Scottie senior, led her girls' team to their victory. She ran a 20:10.84 to finish in second place. Freshman Tanae Baker also turned in a top five performance, finishing in fourth place overall with her time of 21:08.85. The young runner was enthusiastic about the meet. She said, "It was a great morning to be running with perfect weather for such a physically tough course. We have trained for the hills we faced in Poplar and it showed as both the high school boys and girls brought home first place. We also ran very well individually."

The Glasgow cross country teams will be in Havre on Saturday, Sept. 11. The meet is scheduled to start at 10 a.m.