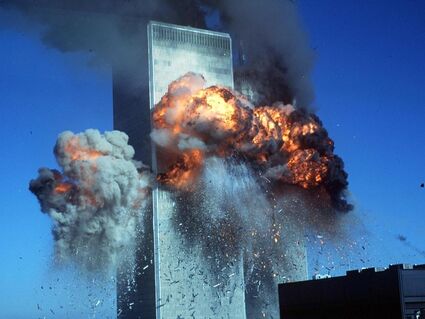 Lost in dreamland, I heard the door to my bedroom open. It was my mother, but the sun was barely shining.

Irritated at being stirred from my slumber, I told her to go away.

But, something was wrong. I could see it on her face. I don't remember exactly what mom said, but she walked quickly to the little box TV at the foot of my bed, turning it on.

Still halfway between unconsciousness and waking, I propped one eye open. I saw a building on fire.

'Why does my mom want me to watch a movie at this ungodly hour?' I thought.

I am not sure when I realized this was no movie. Perhaps it was when United Airlines Flight 175 crashed on live TV into the southern facade of the South Tower at 9:03 a.m. Eastern Standard Time. I remember it well. The plane was there, and then it was not. All remaining was a giant ball of fire.

I watched intently as the Twin Towers spewed smoke. Folks up on the top floors, not wanting to burn to death, could be seen jumping over the edge to their deaths.

Within an hour, both towers had collapsed.

Another plane crashed into the Pentagon, and another into an empty field near Shanksville, Pennsylvania due to the heroic efforts of her passengers.

I was 16-years-old. I did not understand the ramifications of the tragedy I had just seen unfold. I knew no one in New York City personally, and had no relatives living there.

I did remember standing on top of one of the towers in the late 1980s when I was knee-high to a grasshopper. It was strange to know I had been there, and I knew what had happened was bad, but I didn't know what to feel about it. At the time, I didn't really feel anything at all.

It was a Tuesday, and school awaited. First period was marching band. Normally, the band room was full of a cacophony of instruments blaring, drums tapping and kids yapping. This day, the room had an eerie silence. Our band director talked to us about the incident. I don't remember what he said.

Walking from class to class that day was strange. There was a sense of shock, it seemed, and we all were going through the motions.

Through our TVs, the chaos continued to unfold in New York over the coming days and weeks.

Then, our country was invading Afghanistan.

Some of the kids at my high school decided to join the military as a result of the attacks on Sept. 11. Having imagined myself in the military from a young age, I considered it. Iraq was invaded only a few months before I graduated in 2003.

I took the ASVAB and talked with a Marine recruiter at length. But I was not sure. I was torn.

Growing up, I had been exposed to what had happened to the Vietnam vets. I knew a couple of them. I also read "All Quiet on the Western Front," and had studied the American Civil War at length as a hobby. I knew if I went I might kill or be killed. Or worse, be severely wounded. And for what, exactly?

In the end, I declined to join. I decided I did not want to go into somebody else's' back yard and fill 'em full of lead.

A school friend I graduated with did not make the same choice. He enlisted and became a tanker.

I ran into him years later. I cannot recall his name. He told me about his experiences. He said, from the air, Afghanistan and Iraq look much as our home town did. But, he said, people there were trying to shoot you out of the the sky.

He told me about one day when he was manning a Browning.50 caliber machine gun on his M1 Abrams. A mass of insurgents charged his tank. He put them down, easily.

The horror of cutting down his fellow man was painted all over his face. He looked almost sick to his stomach, and his eyes seemed still transfixed on the bloodied and mangled bodies of the dead lying in that dusty street. He said the bullets had torn most of them in twain.

I think he went back to the front after I saw him, after completing his time at home on leave. I don't know if he survived the war.

Instead of joining the military, I became a newspaper reporter.

My hometown newspaper was near three military bases, one Marines, one Army and one Navy. As such, I found myself on one base or another quite often to interview Marines, soldiers and sailors.

In 2009, I interviewed Marine Corps Sgt. Edward Passetto. On July 19, Passetto, a Harrier mechanic with Marine Corps Air Station Yuma's VMA-214, was stationed at Kandahar Air Field in southern Afghanistan when a Russian helicopter crashed shortly after takeoff. About 16 civilians died in the crash, caused by a mechanical malfunction. (Read the full story at https://www.yumasun.com/yuma-marines-one-arm-rescues-2-lives/article_3fed5055-4410-5dee-91de-1e2b39ae20a3.html)

Passetto risked life and limb to rush to the burning Russian MI-8 helicopter, this despite him having one arm in a sling due to a previous injury. He saved several lives that day.

I remember this years later not only for Passetto's heroism, but for the trauma it caused him.

When I asked how he felt about his actions that day, Passetto said "it is like a double-edged sword. It feels good but there have been repercussions. I was diagnosed with PTSD (post-traumatic stress disorder), and I have been having nightmares and anxiety attacks about the crash. I've been seeking help and I've been taking medication, and now I have it under control."

All this brings me to the tale of two Americas. One existed before Sept. 11, 2001, and the second, after. It seems we as a country have been in a state of PTSD ever since. Compound that with the Great Recession and now the COVID-19 pandemic, and the United States is nearly unrecognizable now when compared to before the attacks on the Twin Towers.

I remember the 1990s as being a golden age of culture, music, art and general optimism. Sure, there was scary stuff like the AIDS pandemic, but for the most part, at least in my experience, the mood of the nation was generally positive. The worst we had to deal with were a few small conflicts in Somalia and the Balkans. Oh, and a certain smooth talking president who became too familiar with a White House staffer.

I remember a country whose curiosity was unquenchable. I remember dreaming of brighter days ahead and having a belief the future was going to be good. We had, after all, just won the Cold War and the world was enjoying a sense of peace and prosperity not before seen. There were three Star Trek spin-offs on cable, and X-Files warned us about the "deep state." Our eyes and our imaginations were on fantastic things, upon achieving fantastic things.

Today, it feels as if we are in a dystopia, one of those Star Trek episodes where the crew ends up in future where things have gone terribly wrong. Only, for us, we don't have some nifty way of overpowering our warp core or flying around the sun in a manner to induce time travel in order to travel back and fix whatever calamitous event caused the problem to begin with.

No. Now we live with an overreaching government hell bent on restricting personal liberties. This can be traced right to the terrorist attacks and the subsequent "Patriot Act." They should have named it the "Removal of Rights to Foster a False Sense of Security Act."

The pernicious government overreach authorized by the Patriot Act became public knowledge in 2013 after Edward Snowden, a contractor with the National Security Agency, leaked documents detailing just how powerful our government had become.

Sadly, none of the revelations were all that surprising. One thing, however, that did catch my eye was data showing the government had tapped reporters with the Associated Press without a warrant in the name of "national security."

This is troubling on so many levels, not least of which its violations of the Bill of Rights. As a journalist myself, such violations were even more troubling.

Now, there is cancel culture, lock-downs, vaccine and mask mandates and a very real attempt by some to rewrite American history "1984" style.

I hope this is just a phase, but I cannot be sure.

I, for one, miss the 1990s. It seemed so innocent and optimistic by comparison.

I wonder where we would be today had 9/11 never happened?

In a better place, I suspect.