Reds' Season Comes to an End 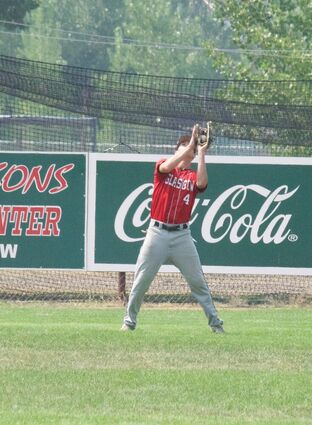 Calvin Bengochea makes a catch in during a Glasgow Reds game during the 2021 Class A East District Tournament held in Glasgow July 22-25.

The Glasgow Reds served up thrills at the 2021 Class A East District Tournament held in Glasgow this past weekend. At bat and in the field, Glasgow thrilled their fans over four games, in which they went 2-2. Their losses came at the hands of the Glendive Blue Devils on Thursday and the Laurel Dodgers on Saturday. Both of those teams faced off in the championship game with Blue Devils coming out on top by a score of 14-2.

The Reds' tourney journey began with a 14-11 loss to the Glendive Blue Devils due to two huge hits by Blue Devils slugger Matt Dufner Thursday evening. Glasgow returned to the diamond Friday morning to issue a blistering defeat to the Wolf Point Yellow Jackets, 11-1. Saturday morning, they went to an extra inning to earn a one-run victory over the Billings Blue Jays, 12-11.

That win pitted them against the Laurel Dodgers, the tournament's number one seed. Each team had taken a loss at the hands of the Blue Devils. Game 12 came down to a single run as well as the Reds made the Dodgers fight for their 4-3 win in a defensive battle that came down to the final inning of play. Despite their strong showing, the Reds were forced to bow out of the tournament as Laurel continued their advance to the championship game.

Game one pitted the fifth-seeded Reds against the fourth-seeded Blue Devils. Glasgow lit up the scoreboard in the top of the first when a JT Spague single sent Tel Aune home. Glendive answered with a single run in the bottom of the inning. They shut out the Reds in the top of the second before sending three runners home to take a 4-1 lead after two.

Glasgow responded by racking up four runs in the top of the third and forcing a pitching change. Aune scored when Rance Rhoads was walked, advancing the runners. Calvin Bengochea nailed a double fly ball to send Juliun Benson and Jeramiah Benson home to tie the game. Rhoads completed his trip around the bases on a passed ball to give the Reds the lead.

The Blue Devils then went three-up, three-down in the longest half-inning of the tournament as lightning caused a weather delay. Hansen increased Glasgow's lead in the top of the fourth, scoring on a Juliun Benson line drive to left field. But then the momentum began to shift in Glendive's direction. An Orion Lapierre score preceded a three-run homer by Matt Dufner as the Blue Devils reclaimed the lead.

Jeramiah Benson scored the Reds' lone run in the top of the fifth on a passed ball with Riley Smith at bat to bring Glasgow back within a single run. Glendive sent two runners home to start the bottom of the fifth and build on their lead. The bases were loaded when Dufner stepped up to the plate. On a full count, the Glendive all-conference player connected for a grand slam and a 14-7 lead after five innings.

Neither team managed to touch home plate in the sixth inning. Glasgow rallied in the top of the seventh, scoring four runs to cut into Glendive's lead, but not mustering enough to send the game to an extra inning. Calvin Bengochea scored on a passed ball with Tel Aune at bat and Mark Eliason scored when Aune singled on a line drive to center field. Smith scored when Sprague was hit by a pitch, advancing the runners. Jeramiah Benson was walked which again advanced the runners and sent Aune home for the Reds final score of the game.

Bengochea went 1-for-1 at bat with two RBIs for the Reds. Sprague also had two RBIs. Rhoads went 2-for-4 at bat. Aune led the team with three stolen bases, while Tatum Hansen, Rhoads and Sprague added one each.

In their second game of the tournament, the Reds put up runs in all six innings as they ran away from the Yellow Jackets 11-1. Glasgow started the game off right, sending Wolf Point out to the field after three batters. Aune was first around the bases, scoring on a Sprague line drive to center field in the bottom of the first. Glasgow again allowed only three Yellow Jackets a chance at bat before their turn at bat.

Rhoads and Jeramiah Benson both scored when Walker Laumeyer singled on a line drive to center field. Mark Eliason scored on a passed ball with Hansen at bat. And Aune made another trip around the bases complete when Sprague singled on a ground ball.

Wolf Point made it through their batting line-up in the top of the third but no further as the Reds shut them out again. Jeramiah Benson scored on a passed ball with Laumeyer at bat to increase Glasgow's lead to 6-0 at the end of three innings. Wolf Point's lone run came in the top of the fourth when Preston Swenson scored on a balk by pitcher Mason Hunter. Glasgow answered in the bottom when Bengochea batted in Juliun Benson on a line drive to left field.

Glasgow allowed the Yellow Jackets only three at-bats in the top of the fifth before scoring two more runs. A rare appeal at second sent courtesy runner Jack Kolstad, in for Walker Laumeyer, back to the dug out for the Reds' second out but Glasgow scored twice before getting hit with a third out. Aune scored on a Hansen ground ball to left field and Hansen scored on a Juliun Benson ground ball.

Wolf Point again saw only three batters approach the plate before Glasgow returned to bat. Bengochea scored on a Rhoads fly ball to right field and Riley Smith, in for Rhoads, scored on a Jeramiah Benson sacrifice fly to right field to end the game as the Reds went up by 10 runs.

Hunter earned the win for Glasgow, pitching all six innings. He allowed one run on one hit while throwing six strikeouts and a 58.9 strike percentage.

Aune went 3-for-4 at bat for the Reds while Laumeyer was 2-for-3 with two RBIs. Sprague also had two RBIs while Hansen, Bengochea, Rhoads and Jeramiah Benson had one each. Juliun Benson had two stolen bases and Aune, Hansen, Rhoads and Sprague had one a piece.

The win set the Reds up to face the third-seeded Billings Blue Jays on Saturday morning in what would prove to be a nail-biter of game. Glasgow ran up the score over the first three innings before Billings, apparently realizing their season was in danger, came alive in the bottom of the third and fourth innings to claw their way back into the game. A defensive battle then ensued but Glasgow came out on top in the extra inning.

Glasgow came out strong, sending three runners home. Aune scored on a Sprague fly ball while Rhoads sent Juliun Benson and Sprague home on a ground ball to center field. Billings put up one run the bottom of the inning before Glasgow added four more to their line on the scoreboard in the top of the second.

Jeramiah Benson rounded the bases on a Hansen ground ball to the Blue Jays' shortstop to start the inning's scoring. Sprague doubled on a line drive to left field and sent Aune and Hansen home before scoring himself on a Bengochea line drive to center field.

Glasgow shut Billings out in the bottom of the second and proceeded to put up four more runs in the top of the third. Aune singled on a line drive to left field and sent Rhoads and Smith home. Jeramiah Benson scored on a Juliun Benson line drive to right field and Aune scored on after tagging up after Sprague lined in to a double play, taking out him and Hansen.

Neither team scored again until Billings put up two runs in the bottom of the seventh to tie the game and force the extra inning. Spague was hit by a pitch, kicking off the Reds' at bat. He made it second on a Bengochea sacrifice then advanced to third on an error by the Blue Jays' second baseman. Rhoads then hit a sacrifice fly to right field, which sent Sprague home, giving Glasgow the lead when they needed it most.

Back in the field, the Reds ended the game in dramatic fashion. Shortstop Smith tossed the ball to Juliun Benson at second, who then sent it on to first baseman Rhoads for double play and the first two outs. The very next batter sent a pop fly up and Rhoads was there to make the catch and win the game for Glasgow.

The win advanced Glasgow to game 12 of the tournament to face off against the Laurel Dodgers. The top-seeded team allowed Glasgow only three batters before stepping up to the plate. Laurel managed two runs before Glasgow hit them with a double play to end the inning. Sprague got the out at second before sending the ball to Rhoads at first.

Glasgow cut Laurel's lead in half in the top of the second when Smith grounded into a double play but still sent Sprague home. Laurel went three-up, three-down in the bottom of the inning. Glasgow tied the game in the top of the third when Aune scored on a Juliun Benson ground ball. But the Dodgers regained the lead in the bottom of the same inning.

A defensive battle then ensued for the fourth and fifth innings with goose eggs for both teams. Glasgow broke the stalemate and tied the game again with a run in the top of the sixth. Bengochea took advantage of an error by the Dodgers' first baseman to score with Lauemeyer at bat. Glasgow shut out Laurel in the bottom of the inning before getting shut out themselves in the top of the seventh.

Glasgow nailed another double play in the bottom of the seventh when shortstop Juliun Benson passed to Sprague at second, who sent it over to Rhoads at first. But two batters later, a line drive to center field sent Corese home for Laurel to win the game and end Glasgow's season.

Jordan Plummer took the loss for Glasgow, pitching all seven innings. He allowed four runs on nine hits while striking out three and throwing a 64.4 strike percentage.

Bengochea went 2-for-2 at the plate and Sprague went 2-for-3. Aune added a hit to contribute to Glasgow's five in the game. Juliun Benson had Glasgow's only stolen base.

Glasgow ended the tournament in fourth place, one place higher than they entered it. Aune, Juliun Benson and JT Sprague were named to the 2021 Montana Eastern A All-Conference team, announced during the opening ceremonies on Thursday. 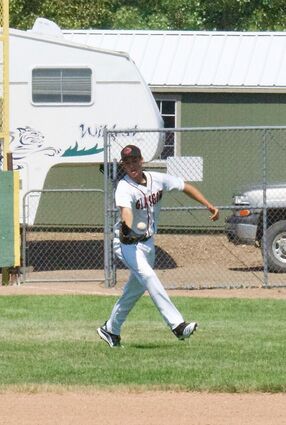 Walker Laumeyer makes the catch in the outfield for the Glasgow Reds during the 2021 Class A District Tournament held in Glasgow July 22-25.