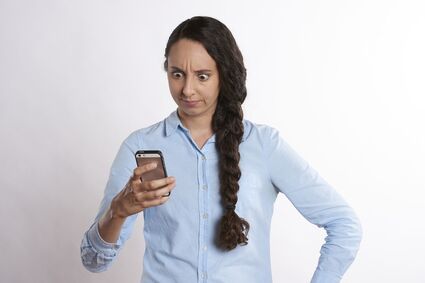 Wow. We really are living in George Orwell's "1984." Or, at least, such a possibility is in sight.

The Democratic National Committee (DNC) is seeking to work with cell phone companies to prevent text messages including "misinformation" about COVID-19 vaccines from being delivered to recipients.

According to an article published by Politico, "Biden allied groups, including the Democratic National Committee, are ... planning to engage fact-checkers more aggressively and work with SMS carriers to dispel misinformation about vaccines that is sent over social media and text messages."

Details on how the fact checkers would detect so-called misinformation is currently scarce.

Let's speculate for a moment.

If the fact checkers are fact checking mass spammers, that is all well and good. Those robots are one hell of a nuisance.

But, are they intent on fact checking private text messages between friends and family?

If that is the case, it is truly terrifying and a blatant violation of the Fourth Amendment, which states "The right of the people to be secure in their persons, houses, papers, and effects, against unreasonable searches and seizures, shall not be violated, and no Warrants shall issue, but upon probable cause, supported by Oath or affirmation, and particularly describing the place to be searched, and the persons or things to be seized."

When Edward Snowden blew the whistle on mass government surveillance almost a decade ago, the classified documents he leaked proved the NSA was vacuuming up data on a worldwide scale, including digital messaging.

But, the documents stated it was only metadata being collected, not the actual phone conversations or text messages themselves. Metadata includes the date and time the message, email or phone call was sent and received, and by whom.

Is this new plan apparently being pursued by DNC an indicator the Feds have now begin snooping into the actual contents of messages? It is a definite possiblity.

But, how could the Feds skirt the Fourth Amendment?

Well, say hello to "Third Party Doctrine." The legal doctrine states that citizens who voluntarily give information to third parties such as banks, phone companies, internet service providers and e-mail servers have "no reasonable expectation of privacy."

A lack of privacy protection laws allow the United States government to obtain information from third parties without a legal warrant and without otherwise complying with the Fourth Amendment.

So, if the Feds declare this issue a threat to national security, they would likely have zero problems reading and blocking messages from private citizens it deemed "misinformation."

That is far too much power in the hands of the government.

It's time for our legislators to close this loophole and restore the right of every citizen to privacy, even in the digital realm.

We have such protections for our physical property, why not in the virtual world?