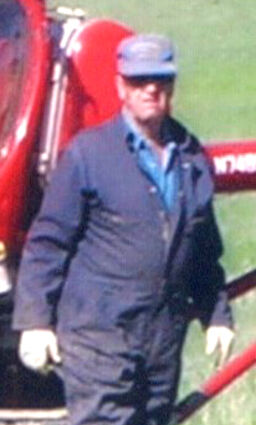 Jerry was born in Baker, MT, on December 21st, 1937, to Bob and Esther Coldwell, he joined a brother Cole. He attended grade school as well as high school in Baker.

When Jerry was a sophomore in high school, he traded a horse and $300 for his first airplane, which began a lifelong love affair with flying. During his high school years, he often rode backup with his grandfather, John Coldwell, while John made his daily rounds as sheriff of Fallon County.

In the early 1950's the family bought the John Howard Ranch in the Haxby Area, Northeast of Jordan and moved there permanently after Jerry graduated high school.

Jerry and Delphin (Del) Swanson were married in 1961 and together they had five children.

Jerry traded his airplane for a helicopter and put it to work flying power lines for McCone Electric and phone lines for Mid-Rivers. Later in his flying years he got a contract with Animal Damage Control (ADC) for aerial predator control in Eastern Montana.

He served as a member of the school board for Kester School for several years and was Garfield County Commissioner for 12 years.

After he retired, he continued to use the helicopter on the ranch for predator control and handling livestock.

Jerry was proceeded in death by his parents, Bob and Esther and his brother Cole. Two granddaughters and one daughter-in-law.

Should friends desire, memorials may be made to Garfield County Rural Fire, those wishing to can specify funds go to the new building.

There will be a joint memorial service for Jerry and John Coldwell on Saturday, June 12 at 2:00 pm in Jordan's High School Gym. A luncheon will follow at the VFW Hall in Jordan. Everyone is invited.