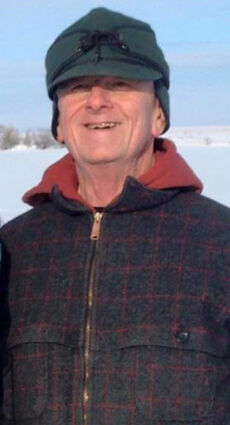 Saco native Andy George Beadle, 75, of Choteau finished living in his body on earth on April 28, 2021. As a man who meant so much to so many, he will live on through his children and grandchildren and in the memories and hearts of those who knew him. His final days were spent with family surrounding him in Choteau.

In Glasgow, Montana on Dec. 16, 1945, Andy arrived in as the first baby boy born to John and Bernadine Beadle. He joined three older sisters, Evelyn "Babe," Joan and Jean, at home in Saco. Seven years later, he was blessed with his little brother, Brien.

From the start, Andy was looking for fun and was a mischievous youngster. When recalling his elementary years, Andy said, "If they'd have had that title, ADHD (attention deficit hyperactive disorder) back then, they'd have used it on me." He spent many of his days in the classroom staring out the window wishing he could be outside.

Andy liked to be active and thus developed a love for sports, hunting, fishing, and working on the family farm south of Saco. In high school, Andy excelled at socializing and sports, but was not as inclined toward excellence in his studies. During high school, one of Andy's various jobs was to run the movies at the local theater. Andy told about how he had to pay attention to when the reels were getting low and make a quick switch, rethreading the film so that movie patrons didn't notice.

It was during his high school years that Andy took a shine to Linda Reilly, a local girl, who became his sweetheart.

Following high school, Andy moved to Billings where he took some classes at Eastern Montana College. During this time, he started lifting weights and became involved in competitive body building. He also worked at Pierce Packing plant. He said it was tough work hauling quarters of beef on his shoulders, but he liked the physical challenge of it. During this time, he and Linda had a baby daughter, Andrea, who died at birth. Andy did not like that he was in Billings and Linda was in Saco, and as he told it, he finally convinced her to marry him. The couple was wed on Dec. 26, 1964, at St. Francis Assisi Catholic Church in Saco. The next February, their first and only son, Darren was born.

Andy liked nice vehicles and often told stories about his various cars throughout the years, his favorite being his 1966 Blue Corvette. In the early 1970s, the family moved back to Saco where they became business owners, running Jake's Bar for years. During his early years in Saco, he enjoyed spending time team roping with his good friends, Ron and Lyndie Haynes, on his favorite horse Woody.

In June 1975, daughter Mandy was born, and in 1983, Kayla completed the family. In addition to shifts at Jake's Bar, Andy also worked for Vince Barnard and Darrell Menge as a ranch hand. Eventually Andy went to work for MDU (Williston Basin/Bittercreek Pipeline) and retired from the company in his early sixties.

Andy served the Saco community in a variety of ways. He spent time on the ambulance crew and volunteer fire department, in rodeo clubs, and was an enthusiastic supporter of the Saco Panthers, Green Bay Packers, the Chicago Cubs, and, later, the Choteau Bulldogs.

As their children grew, life brought challenges and changes to the family. Andy was divorced and spent his remaining years unmarried. Andy was active with golf, hunting, fishing, and trap shooting. He enjoyed friends from all over Montana, and some special friends from Wisconsin, who came yearly to Saco for the recreation it offered.

In 2007, Andy was diagnosed with thyroid cancer. This time marked the beginning of several medical challenges for Andy. His son's wife, Jane Wolery, became a devoted companion on his medical journey. To get away from the cold, Andy spent a few winters in Arizona. While in Arizona, he enjoyed the weather, playing on a baseball team and taking in many sporting events as a spectator.

In 2017, the thyroid cancer continued to ravage Andy's body and he underwent surgery to remove the cancer from his jaw. Because of complications with recovery, it became necessary for Andy to move to Choteau to be closer for his family to care for him and for him to have easier access to his medical team in Great Falls. He rented an apartment in the Skyline Lodge in Choteau, quickly making friends in the lodge and community.

Even with his many challenges, Andy kept a positive attitude and focused on the people he met during his journey. Not only did Andy know his doctors, but he also knew the nurses and schedulers. When Andy had an appointment, he stopped to talk to every worker, knew their names and details about their lives. He inquired about them if they were absent. His affable nature shone.

Andy lived more than seven decades and thus was able to be many things in his life, a son, brother, friend, worker, husband, provider, retiree, and patient. He was a rascal, a jokester, occasionally a hot-head, a clown, a storyteller and even a story maker - indeed, there are many who have memories and tales to tell with Andy as the main character.

He will be lovingly remembered, especially in his most important roles in life as a father and grandfather. A light in the last year and a half was the birth of his youngest grandchild, Beckett Andy, who brought Andy a tremendous joy.

Though the cancer provided tremendous challenges, Andy will be remembered by many for the determination and upbeat attitude he displayed.

Andy was preceded in death by his infant daughter and his sister, Joan (Beadle) Thompson.

While no service is planned at this time, the family encourages those who knew Andy to remember him through a few well-planned high jinks, shenanigans and a good joke, for he loved to make people smile and laugh. The world could use more smiles and laughter ... and upbeat people like Andy.

Condolences can be made to Andy's memorial page at http://www.asperfh.com.