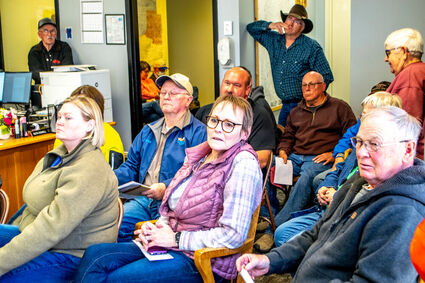 Katie Britzman, from left, Monica Garten and Norm Girard were among the many area residents in attendance of the April 28 County Commissioner meeting to express concerns over the disbanding of the former Valley County Refuse District Board.

Community ire over the recent disbanding of the former Valley County Refuse District Board was on full display during the April 28 County Commissioner meeting.

"To dissolve a board is your last resort," said Kristi Brabeck, Valley County Airport commissioner. "I understand everybody has personality differences. It is like a divorce. You have parents, and you have your child, which is Valley County. So, as a board who works under your guidance at will, I don't understand why it came to this. There should have been some mediation."

During their regular meeting April 21, the three commissioners voted to disband the refuse board - effective April 23 - based on legal counsel indicating the nine member volunteer body has not had any actual legal authority in 25 years.

The three commissioners have now taken on the additional role of interim Refuse District Board for the indefinite future. Their first meeting in this capacity was Monday.

Dan Carney, former refuse board member, claimed the move by the three commissioners was nothing more than a power grab.

"I have been sitting here and listening, and what I see is this; they do not trust the [former board members] to run this outfit," Carney said. "You have nine people that are there now. We did not do our directions, [and] we are willing to take the blame. But, to get rid of all that experience that you had there to me is unforgivable. You've got nine people that had been volunteering their time and are willing to keep volunteering it. You guys took that away from us by saying we can do better."

Carney said the communication between the former board and the county government was horrendous.

"As a member of the board, I can remember asking for certain information from the county attorney and from other people and we got nothing, period."

Dylan J. Jensen, County Attorney, said he has witnessed the opposite.

Commissioner Mary Armstrong has said centralizing the authority of the board to the three commissioners will help expedite reassessments of properties within the landfill district in time for tax statements later this year.

According to a Refuse District Audit completed by the county in early 2021, there are numerous errors in the assessment fees on property tax statements including no assessment on eligible properties and, or, assessments that do not accurately reflect current levels of waste generated.

The current assessment fee schedule relies on the trash hauler to identify the level of solid waste generated by commercial and government entities in the city of Glasgow only. As such, no evaluation of solid waste volumes is performed currently for commercial or government properties outside city limits.

The audit also found no one had been charging or collecting outstanding debts for refuse removal from the Fort Peck Tribes since at least the late 1990s, which has resulted in lost revenues of more than $500,000, Armstrong has said.

Rod Karst, former refuse board member and current Glasgow City Council president, said Monday the board had made inroads with the Tribe, which has reportedly agreed to begin paying once more starting May 1. Additionally, the assessment issue had already been addressed and was moving forward when the board was discontinued, Karst said.

That claim remains a point of contention with the county.

The key, Armstrong said during the meeting, was to streamline the process to ensure all taxpayers are getting a fair deal.

"The pace at which the board moves with some of the issues we have been discussing the last couple of years I have been involved, it moves at a board's pace where you meet once a month, you've got nine members. This issue with the fees, this like a public utility and if you are paying a higher electricity rate than somebody else, you are going to want to know why, and you are going to want it fixed."

Dealing with the speed at which the former refuse board operated was a source of frustration, said Commissioner John Fahlgren.

"I think Dylan expressed it pretty well. We spend more time trying to figure out solutions to the refuse district - problems that come up there - than we do with five other departments. It takes us a lot of time. It doesn't have to be that way."

The next step for the three commissioners, after 8,000 properties countywide are reassessed and a new fee schedule is established for customers, will be to determine the governance of a new refuse board.

"We have not in any way discounted those [former] members from being on the new board, at all," Armstrong said. "We are not saying we don't want you. But, we've got to figure out what the board should be like, how long the term should be, where people should come from ... because this does represent the whole county. All of that will be taken into account, and I would hope that folks with this kind of experience would want to continue to serve."

Another alternative would be to create a solid waste department within the county government to administer the landfill district.

"Our neighboring county, Richland County, that is the way they operate," Commissioner John Fahlgren said. "They don't have a board."

Such a solid waste department would be operated in a similar manner to the way the county roads department handles transportation infrastructure, Fahlgren said.

An advisory board may exist in symbiosis with the solid waste department, providing input from community members.

But, for now, no final decisions have been made.

"We are going to try and get through this and get these assessments done in time for tax time this year, and will be evaluating as we are going forward," Fahlgren.