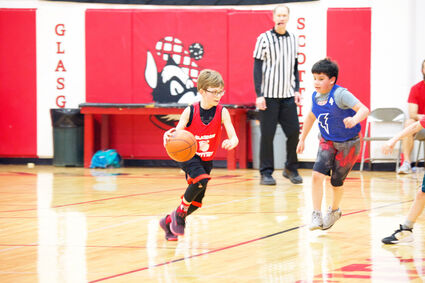 Beckett Doornek makes a quick move down the court at the 2021 JJMT during a game at Glasgow High School on March 20.

Sixty-four teams and untold numbers of basketball coaches and fans descended on Glasgow this past weekend for the 2021 Jeff Jurgens Memorial Tournament. Hoopsters were spread out over four locations and five courts around Glasgow as fourth-, fifth-, sixth-, seventh- and eighth-graders hit the hardwood in an effort to claim the top spot.

Organizer Ryan Fast told the Courier players were lined up outside the Civic Center Saturday morning, anxious and ready to play ball. For two days nine girls teams and eight boys teams competed in the eight-grade division. In the end, Bainville won over Plentywood, 35-22, in the girls' bracket, while North Country beat Havre, 34-31, for third place. On the boys' side, Glasgow beat Malta to win it all, 53-43, and Havre beat Scobey, 52-46 for third place.

At the Evangelical Church, seventh graders competed. Havre defeated Scobey, 53-8, in the girls bracket, with Glasgow defeating Malta, 19-12, for third place. Malta won the boys side, beating Lustre, 54-24. Lustre beat Glasgow, 53-44, to make it to the championship game, placing Glasgow in third place.

The sixth graders were at St. Raphael's gymnasium, where Havre narrowly beat Billings, 25-23, to win the girls' side. Scobey defeated Harlem, 35-22, for third place. The three boys teams battled round robin, with Glasgow winning all three of their games, beating Scobey 40-24, defeating Jordan 57-31 and Scobey again, 36-35.

Fourth- and fifth-grade teams were at the two courts in the GHS gym. Circle came out on top in the girls' fifth-grade bracket, defeating Plentywood, with Hinsdale coming in third place. Malta won the boys' fifth-grade division with three wins in round robin place. Scobey came in second. Malta and Culbertson each won two games in the fourth-grade girls round robin play. In boys' fourth-grade action, Glasgow 4 lost to Malta, 36-15 in the championship game, while Glasgow 3 beat Hays 37-35 to claim third place.