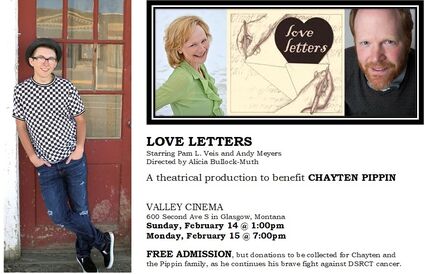 As a Valentine's Day fundraiser for

Pam L. Veis and Andy Meyers will perform AR Gurney's comedy, LOVE LETTERS, a unique and imaginative theatre piece which is presented, as suggested by the playwright, with scripts in hand. It is comprised of letters, frequently funny and touching, exchanged over a lifetime between two people who grew up together, went their separate ways, but continued to share confidences. Admission is FREE, but donations will be collected, to go directly to Chayten Pippin and family.

An energetic and valued member of the Fort Peck Theatre family, Chayten Pippin has desmoplastic round cell tumor, a rare sarcoma cancer of the abdomen. While a trial treatment of radiography therapy in New York City is a possibility, Chayten's currently treatment plan continues chemotherapy in Denver.

Meyers is the Artistic Director for Fort Peck Summer Theatre, and Veis is an audience favorite with the company, who starred in Driving Miss Daisy, Always...Patsy Cline and On Golden Pond. Alicia Bullock-Muth serves as director and vocal soloist.

Social distancing will be strictly observed, and masks required. In accordance with Valley County Health Department protocol, seating capacity is also limited, so please arrive in plenty of time to purchase some concessions and safely find a seat. Doors will open 1 hour prior to showtime.