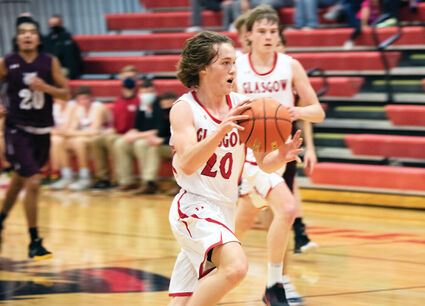 Vinny Chappell drives the ball down court on a fast break during the Glasgow Scotties' basketball game against the Harlem Wildcats on Jan. 14.

The Glasgow Scottie boys basketball team dropped their home game against the Harlem Wildcats on Thursday, but bounced back to take a 20-point win over the Poplar Indians on the road Saturday. Keigan Skolrud led the Scotties in scoring in both games, putting up 24 against Harlem and following it with a 32-point performance against Poplar. Against the Indians, Bergen Miller, 13 points, and Vinny Chapell, 10 points, buffeted the big man's scoring.

But against Harlem at home, Skolrud was the only Scottie to hit double digit scoring. Harlem's game was played from outside, while Glasgow focused on their inside game, and the scoring reflected that. Harlem's R.J. Ramone was the star of the night in Glasgow, draining 10 three pointers on his way to scoring 39 points. "Harlem came into the game with three of the best guards in the conference," coach Paul Yoakam.

A combination of being unable to counter defensively along with lots of easy missed shots and free throws cost the Scotties heavily in the game, in addition to being unable to shut down the Wildcats' perimeter game. Glasgow went only 10-of-22 from the line over the game and were unable to drop their shots despite strong rebounding and multiple attempts at the basket.

Yoakam said his boys played well for most of the game but were unable to finish strong. Harlem held only a seven-point lead at the half and an 11-point advantage going into the fourth quarter, when they broke the game wide open powered by Ramone's 14-point performance.

Harlem took an early lead in the game, but Glasgow battled back to keep the first quarter fairly evenly matched. Harlem led by two points at the end of eight minutes, 13-11. Skolrud put in two buckets and a free throw for five points, while Hunter Collinsworth also had five points, including a three pointer. Miller added one point from the line.

Ramone would put up 11 points in the second quarter as the Wildcats extended their lead to 22-17 going into the half. Skolrud led the Scotties with four field goals and a free throw as Glasgow looked to feed their man in the center. However, the rest of the team did not shy from the basket, driving inside and looking to shoot. Chappell drained a three and a free throw while Trevor Klind added two buckets for four points.

Harlem continued with their full court press defense in the second half as the Indians continued to add to their lead in the third quarter. Glasgow was outscored 17-13 in the quarter despite a more balanced offense from the home team. Dalton Sand put in two points, Klind and Chappell each had thee including a free throw, and Skolrud had five off two baskets and a free throw. Glasgow held Ramone to only two threes in the quarter, with strong defense from Klind, after rotating through a number of defensemen on the guard. "He's our go-to defensive player," said Yoakam.

The game broke wide open in the final eight minutes of play as Harlem scored 20 points to Glasgow's 11. The Scotties were only able to sink three of eight opportunities from the charity line. Despite the scoring deficit, the home team continued to fight until the end of the game, as did the Wildcats, who continued with their full court press in a run-and-gun finish.

Skolrud put in Glasgow's three free throws and a bucket for five points, while Klind, Riley Smith and Collinsworth each had two a piece. Chappell, Collinsworth and Sand led the Scotties in fouls with three each of Glasgow's 12 total. Klind, Miller and Skolrud had one each. Glasgow was called for nine infractions in the first half and three in the second. Harlem had six fouls in the first and nine in the second half.

On Saturday against the Indians in Poplar, the Scotties overcame a first half deficit for a 70-50 win on the road. The Scotties continued to go to their post, setting up Skolrud for 32 points in the game, but also found their outside game as Miller hit three three-pointers. Glasgow went up by one in the first eight minutes of play, 19-18. Skolrud had 11 points on five field goals and a free throw. Sand, Klind, Chappell and Miller added two each. Poplar held Glasgow to only six points in the second quarter while putting 10 up on their side of the big board, including two three pointers. Chappell, Skolrud and Collinsworth each put in two points.

Glasgow came out strong in the third quarter, obliterating Poplar's 28-25 half time lead putting up 20 points to Poplar's 11. Miller led the Scotties with eight points, including two threes. Skolrud added three baskets and a free throw for seven points, while Klind had a basket and a free throw and Chappell scored two points. The Scotties did not let up in the final quarter, turning in their highest scoring eight minutes of the game. Glasgow scored 25 points to Poplar's 13 for the 70-50 victory.

Skolrud put in four-of-six from the line and for field goals for his 12 points. Miller added another basket from outside the perimeter. Sand and Chappell each had four points on two shots, and Klind added two points. Glasgow had five fouls in the first half and nine in the second. Collinsworth was called for four fouls, Sand and Skolrud for three each, Miller two, and Chappell and Klind one each.