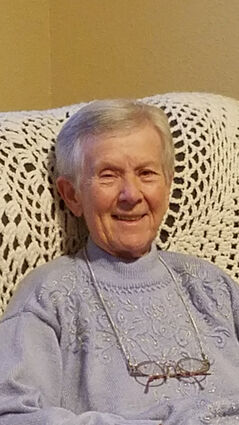 Dora Lou Jacobson, 79, passed away peacefully on Saturday, Dec. 26, 2020 at BeeHive Homes in Helena, Mont. Special appreciation is extended to the owners and staff at BeeHive Homes for their unprecedented care over the last year and a half. They filled her life with love, friendship and happiness.

Dora Lou was born in Glasgow, Montana to George and Theo (Herrington) Scanson on January 10, 1941. She attended school in Glasgow, graduated in 1959, and married Jerry Jacobson of Glasgow on January 21, 1961. They were blessed with two children, Brett and Sonda, and fortunate to have 58 wonderful years together before Jerry's passing in 2019.

After marriage, they both attended Northern Montana College where Dora Lou received her degree as a Legal Secretary. She began her career in 1974, which she maintained as she and Jerry transferred to several different states nationwide to fulfill his law enforcement career. They were able to return back home permanently to their property north of Glasgow in 1994, where she retired in 2014.

Dora Lou was also an amazing seamstress who also enjoyed knitting and crocheting. Throughout the years she blessed every family member with clothing, sweaters and afghans. Her most treasured projects were making custom towels for her grandchildren and great grandchildren as each was born.

Family was very precious to Dora Lou. She was preceded in death by her husband Jerry, parents George and Theo, brother Esten, and many dear extended family members and friends.

She is survived by her son Brett, daughter Sonda, grandchildren Lenny, Britni, Seth, Chelsie and Nicole, great grandchildren Adam, Eileen, Tucker, Dulcie, Louka and Easton, the Scanson, McVee, and Myhre families and many dear friends across the nation.

Dora Lou remained a very active member of the First Baptist Church in Glasgow. She truly believed that Pastor Lonnie, his family and his teachings were her own personal blessings. This church was her lifelong love since infancy. To honor and extend this love, in lieu of flowers the family is requesting memorial donations be made in Dora Lou's name to the First Baptist Church, 700 4th Ave. S., Glasgow, Montana 59230.