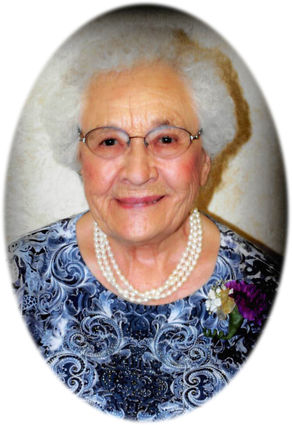 Marjorie was born May 2, 1924, in Alamo, N.D., to John and Elva (Deal) Pehrson. She spent her early life growing up in Alamo, where she had many fond memories.

When she was about 12 years old, with the Depression raging and the Fort Peck Dam under construction, her father moved the family to Wheeler, Mont., where he built and the family ran the Wheeler Hotel. The culture of Wheeler was quite a change from the quiet little town of Alamo. When she was 14, she was in a horrific automobile accident that almost took her life. A drunk driver hit the car she was riding in and alcohol was taboo the rest of her life. She spent her high school years in various schools including Glasgow, Wentachee, Wash. and Chinook, Mont. She graduated from Chinook High School in 1941.

On May 24, 1941, she married Kenneth Turner in Glasgow. They were both VERY young. They were married almost 69 years when Kenneth passed away in 2010. Their entire married life was lived in the Nashua, Mont., area where they raised their eight children. Their children gave them the best education they ever received.

Marjorie worked at various jobs while the children were growing up. She sold World Book Encyclopedias (which she thoroughly loved doing), worked at Woolworth's, at AVCO on the Glasgow Air Base and finally as a Paraprofessional in the Nashua School system. She was honored as Employee of the year in Nashua in her later years.

Marjorie was a member of the Nashua PTA, Nashua Gumbo Gals Garden Club, and devoted member of Our Redeemer Lutheran Church in Nashua. She always believed in being a lifelong learner and she took many college courses as an adult.

She was the hostess of the annual Turner Family Brandings held out south of the Fort Peck Spillway. She fed many people for many years, which was a tremendous amount of work, but she managed to keep everyone fed and lots of good memories were made during those times.

One of the highlights of her life was going to Sweden with her friend, Lucille Lindgren. She treasured that experience the rest of her life.

Some of her hobbies included reading, doing crossword puzzles, and working on genealogy, cooking and baking for her family. She is remembered as an excellent cook by her children.

She was preceded in death by her parents, John and Elva Pehrson; her husband, Kenneth; beloved brother, Woodrow Pehrson; and two sons, Darryl and Philip Turner.

Mother's Christian faith was very important to her and she loved Jesus and her Bible. Our mother was deeply loved and will always be missed.

Family received friends 5 to 7 p.m., Friday, Nov. 13, at Bell Mortuary, in Glasgow. Due to the Covid pandemic, a private family funeral service was held on Saturday, Nov. 14, 2020 at Bell Mortuary and burial is in the Nashua Cemetery.