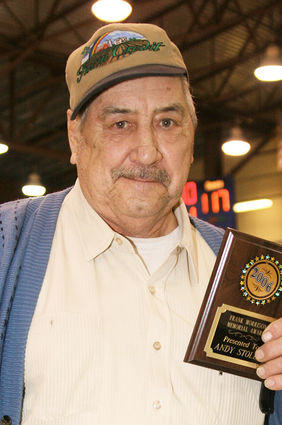 2020, at the Daniels Memorial Nursing Home after a brief battle with illness.

A memorial service and spreading of his ashes is being planned for the summer of 2021, with further

details to come. Cremation has taken place under the direction of the Waller Funeral Home of Scobey, Mont.

graduated from Opheim High School in 1950. He then met and married Carole Nygaard on Sept.

20, 1958, in Columbus, N.D. They lived in Glasgow briefly before moving to the family farm south of Glentana, where they raised their three children, Lori, Randy, and Greg. Besides working alongside his dad on the farm, Andy also worked for the School District later in his life as a custodian in Opheim for over 20 years.

Andy was a talented musician and was known to play many instruments including the piano, violin, and

accordion. He loved to sing praise and worship music and a little bluegrass and swing too.

To say Andy loved sports would be an understatement. He lived for sports! He played on the Scobey

Plainsmen team for several years and when he got too old to play, he coached the young players in the

Valley County and Daniels County areas. He also was known as one of the best baseball umpires in and

around Valley and Daniels Counties.  There are also memories of him taking his baseball glove and cleats

to games in Canada, with hopes of being asked to play. Andy was also a referee for basketball games in

Opheim for years after he retired.

Andy was a dedicated and devoted father, husband, and grandfather. He had a heart of gold; he was

gentle and was always willing to help anyone in need. He will be remembered with fond memories for

his kind and beautiful smile and awnry card playing.

He is preceded in death by his parents, Andrew and Elizabeth; and his sister, Gertrude (Glen) Eliason.

to Laurie; and Greg Stolen; granddaughters Joni Pankratz, Karissa Stolen and Sophia Stolen; and many