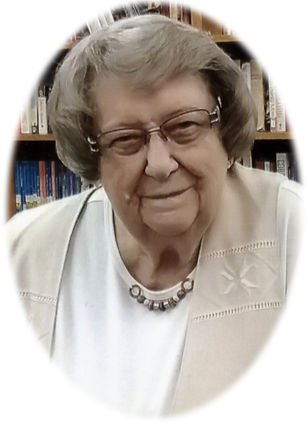 Judy was born in Litchville, N.D., April 13, 1926, to Norwegian parents, Alf and Emma (Kasseth) Rorvik. The family moved to Montana in 1928 and farmed south of Glentana. After their house burned down, they moved to Richland where Judy started first grade. After moving to Glasgow, Judy continued her education and graduated from Glasgow High School.

She started working at The Glasgow Courier as a junior in high school and continued with them for 20 years. She also worked for Glasgow Office Supply, and later MDU from which she retire in 1988.

Judy married Ed Saindon in April 1973 and he passed in 2003. The couple enjoyed their cabin at Rock Creek: boating and neighboring with Dean and Penny Johnson.

She was active in hospital guild and First Lutheran Church. She liked taking the tickets at Fort Peck Summer Theater and working at the county elections. Her passion was needlework. As a member of the quilting guild she made many beautiful quilts, wall hangings and table runners.

She attended First Lutheran Church and it was her pleasure to spend many hours making a traditional Norwegian Hardanger alter cloth for the church. Judy created many keepsakes for friends and family over the years.

She creatively built a doll house, replicating her childhood home that rests on display at the Pioneer Museum.

Judy loved attending the "Karen Marta" family reunions. The summer of 2019, Judy was honored as being the last surviving grandchild of Karen Marta.

Judy was preceded in death by her parents; husband; and two brothers, Allan and Stanley Rorvik.

She is survived by eight nieces and nephews that all viewed Judy as a surrogate mother/grandmother, Pamela, Janice, Greg, Stanley Jr, Dana, Germaine, Michael and Jill Emma; many great nieces, nephews, cousins and friends.

Remembrances in Judy's name can be made to the Pioneer Museum of Glasgow or the GHS Educational Trust Fund.