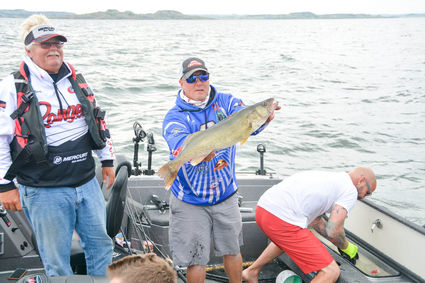 An unidentified angler holds up his nearly 30-inch walleye for a photograph on July 10, the first day of fishing for this year's Montana Governor's Cup Walleye Tournament at Fort Peck.

Early mornings. Long days. Short nights. Those are just a small part of what goes into putting on the annual Montana Governor's Cup Walleye Tournament. But the results are more than worth it, particularly when records are shattered.

The first record fell Nov. 1, 2019 when the tournament's 200 slots were filled in one hour, one minute, the fastest that has ever happened. Fast forward to July 10 and 11 when the anglers hit the water. Last year, Adam Morehouse and Matt Poole set a new two-day record with a weight of 70.04 pounds of walleye. This year's winners, Jason Eggebrecht, of Fort Peck, and Ross Lien, of Glendive, put up 80.97 pounds on the leaderboard, smashing last year's record by over 10 pounds.

Eggebrecht is no stranger to the leaderboard, having taking the top spot in 2018 with Drew Alpers. Of course, some beginner's luck may have played into the win, since this was Lien's first time fishing Fort Peck. The two were presented with a giant $15,000 check, laser-etched plaques and tournament rings to crown their victory. Eggebrecht and Lien caught 32.72 pounds the first day and added 48.25 pounds on Saturday, moving up three places to claim the overall top spot.

"Fantastic. I mean, it was unbelievable," said tournament co-director Todd Young. "The fishing was lights out." While emceeing the event alongside Joe Herbold, Young extolled the virtues of fishing Fort Peck with talk of how few lakes in the country would be able to produce nearly 50 pounds of walleye with a five fish limit. The Montana Gov Cup also boasts the largest payout of any tournament on the circuit, distributing cash to the top 20 percent of the field.

Nick Polivka, Watford City, N.D., and Jeff Malley, Omaha, Neb., came in second place this year with 28.84 pounds on Friday and 36.52 on Saturday, for a total of 65.36 pounds of walleye. Andy and Samantha Rose, of Huntley, Mont., snagged third place with a total weight of 62.96 pounds, after weighing 23.62 and 39.34 pounds on Friday and Saturday, respectively.

The tournament was not without its changes or challenges this year. New this year was the staggered departure time from the marina. Boats were assigned to flights, scheduled to leave in 15 minute intervals. Chamber volunteers and veterans of the event remarked that this was the longest beginning to a tournament they had seen, but were impressed with how smoothly it went. Perhaps the newly imposed rules regarding tournament fines of half the weight of their catch and legal fines from Fish, Wildlife and Parks helped maintain order and a wake-free marina.

Over and over, observers of the tournament have remarked on the growth of the tournament and how it runs like a well-oiled machine. Missing this year were National Guard troops, who in the past have assisted the Chamber in the process of getting over 100 boats into the water in a limited time. The loss of the uniformed volunteers left the Chamber searching for people to step up to keep that machine running this year.

Stepping in to fill the void were volunteers from Long Run and Glasgow Fire Departments. "I needed experienced people," said Lisa Koski, Executive Director of the Chamber. "I called Brandon Brunelle and said I needed up to eight people. But the end of the day he had it handled. They really stepped up."

With a military appreciation for timeliness,firefighter Brian Austin had his men at the marina ready for work before the five a.m. start time and back again in the afternoon for end-of-day procedures. In fact, Koski was so impressed with the firefighters that she is considering asking them to become a regular fixture at the annual tournament.

Another challenge loomed on the horizon. Infamous northeastern Montana winds made for some choppy water on Friday and storm clouds threatened to cut short the afternoon's fishing. However, the storm bypassed Fort Peck even as anglers and weigh boats raced back to the marina. Even though the storm didn't make a direct hit, the winds caused plenty of damage. "I've never seen so many broken or lost windshields," Koski remarked.

At the end of the day on Friday, patrol boats were sent out to assist fishermen who had taken the brunt of the wind. Volunteers had to pull a boat from one of the islands, wedged up on shore by the gusts. Mother Nature proved much more cooperative on Saturday as temperatures hit the low 90s and the water remained smooth as glass, undisturbed by winds.

And of course, the novel coronavirus played a part, imposing a need for social distancing and limiting public participation. Gregg Hunter, a chamber director, explained that attendance at the annual kick-off event was down significantly this year. The Chamber served fewer than half the number they normally feed, allowing only participants and volunteers to attend this year.

"Coronavirus precautions were my biggest challenge," said Koski. She has now worked on three separate COVID-19 plans for Chamber events this year with Ann Millard and county officials. Preparing for the Governor's Cup required extra work as the Army Corps of Engineers also required a health plan. Koski rose to the challenges, noting that the economic impact for the area is incredibly beneficial, particularly to businesses which were most impacted by the state's shutdown. "I mean, it's hard to find that balance between health and money," Koski said as she explained the roughly $500,000 the tournament brings to Valley County disproportionately goes to hospitality businesses such as restaurants and hotels.

"Of course it was a bit different this year, but I'm really proud. People were conscientious of the social distancing," Young said. He said that some tourney participants declined to stay for the awards ceremonies on Friday and Saturday, but that was expected by tournament organizers. For Saturday's final awards presentation, tables in Kiwanis Park were properly spaced and announcers periodically reminded guests to adhere to social distancing recommendations. The Chamber purchased equipment such as handwashing stations, hand sanitizer and sneeze guards to adhere to health officials recommendations.

"Fishing is social distancing. You have two people to a boat and they spread out," said Koski. "The biggest challenge was at the Kiwanis Park." She noted that the pandemic has and will continue to change how we live. Some changes adopted by the Chamber had the unexpected benefit of improving how they run the tournament and Koski notes that some of this year's changes may become permanent fixtures.

Boasting the largest payout of a fishing tournament in Montana, the Chamber paid out over $150,000 on Saturday between the prize money and the Calcutta. "We are one of the only tournaments that is 100 percent payback," said Koski, "thanks to our sponsors." 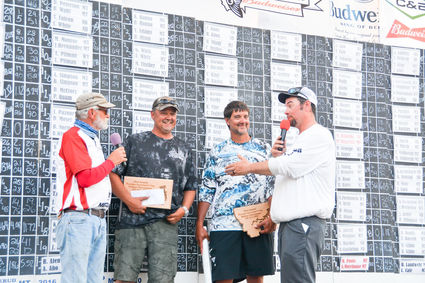 "It is a very streamlined event. My committee members have done it before and know what to do," Koski raved. "I couldn't ask for a better Gov Cup committee." Despite the changes and challenges, the final results on the big board had the hosts and participants celebrating and slightly awed by the success the Gov Cup reaped this year.