KXL To Go Forward Amid Pandemic 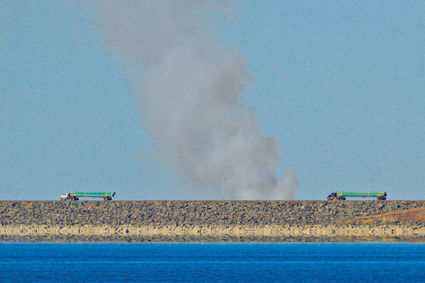 Nate Cooper / For the Courier

Trucks hauling pipes destined for staging areas along the Canadian Border cross the Fort Peck Dam in October of 2018 as smoke plumes in the background. Recently, pipeline workers along with other construction workers have flowed into Valley County to begin Spring construction projects.

TC Energy has confirmed their plans to move forward with construction of the Keystone XL pipeline in Phillips and Valley counties during the COVID-19 pandemic. The planned construction project has brought in 100 workers, and a number of family members, from all over the country who will be living in hotels and recreational vehicles while they begin work on and near the project's border crossing with Canada.

Simultaneously on March 28, at 12:01 a.m., the county ordered all new arrivals in Valley County to self-quarantine for 14 days. That order applies to any individual and is to include pipeline workers who have arrived since March 26, at 12:01 a.m. and to all workers who will arrive until the order expires.

According to County Public Information Officer Todd Young, the workers for the Keystone Project and other construction projects around the county will still go to work in that 14-day period, but will be required to go straight to their lodgings afterward. Those who have been here past the 14-day period can continue as normal but must still adhere to other applicable health orders like the Governor's "stay-at-home order."

On March 30, County Health Officer Anne Millard briefed a team of county officials and business leaders via teleconference about concerns and fears from the public about workers. Namely she had heard concerns from members of the public who worked in direct contact with the new workers.

In response, Millard said the solution she had come up with was that all pipeline and arriving construction workers who have been in the county longer than two weeks would wear pink armbands to identify them as having passed the quarantine period.

Those workers wearing pink armbands will still work on site with new arrivals to the project. A question to Young about whether there was concern among county officials that the bands could provide a false sense of security due to possible cross contamination between workers on the project went unanswered by press time. It was also unclear what measures were in place to guarantee compliance and who the public should contact if they have concerns.

In comments made to the Courier, a local grocer said they trust Dr. Millard's judgement and feels that people should follow the orders and recommendations and stay home, especially if they just arrived in the county. "People need to follow her guidelines," they said. "So many people came past my register today (March 30) I did not know." Asked how the grocer felt about the pink arm band solution she said it was the first she was hearing about it and that she saw no pink armbands during her nine hour shift.

"I just want people to follow the rules," explained the grocer. "I'm putting myself out there, and don't get me wrong, I'm thankful I have a job. I thank God every day for that." They went on to explain that steps were being taken to keep grocer workers safe and that people on quarantine could have food delivered or find people to get their groceries while keeping other people healthy. She said one new arrival she spoke with was told she did not need to quarantine but only had to stay six feet apart from others in the community-a guidance that applies to every person in America.

The grocer's views represent a growing apprehension with incoming workers as local businesses are forced to shutter and people are required to stay home while other elements of the economy continue.

Despite those concerns, many are still excited to see the long-awaited project moving forward.

"This is great news for Montana jobs and for our nation's energy security," said Senator Steve Daines in a press release sent out the morning of March 31. "Construction of the Keystone XL pipeline will create good paying jobs for working Montanans in our energy and construction sectors. I look forward to seeing this important project completed."

The release did not mention the COVID-19 pandemic.

The county commissioners further released a statement to the public (printed in full on page 2A) that did not acknowledge concerns about workers directly but did highlight efforts by the county health department and TC Energy's project manager and safety officer to ensure they meet all county health restrictions while they complete the project.

In a "COVID-19 contingency plan" requested by the Courier, the company constructing the pipeline regionally, Barnard Pipeline, discussed the procedures they will be following to prevent COVID-19 outbreaks while continuing with the infrastructure project. Those procedures are not unlike the Center for Disease Control guidelines. Namely, screening workers traveling to the site to determine if they are high risk and preventing their access to the project. Social distancing, group limits of less than 10 people and forbidding communal meals are also in the guidance.

Leaving and returning to the sites were also addressed in the plan but are now controlled under the county's quarantine health order for new arrivals.

The plan also stated that the company should, "Be prepared for the possibility of local government issuing a shelter-in-place order," and, "Any new developments or orders issued by local governments will be distributed to the project team as they become available."

Young stated that pipeline workers are required to follow all local orders and arrivals will need to quarantine in their lodgings for the 14-day period. He did comment that many of the workers he was aware of had arrived before the 48-hour retrograde timeframe. According to those with direct access to the information, the pipeline workers began arriving last week with many checking in March 24 and 25 and some checking in the 26 and 27. Some arrived as early as March 15 according to Young, with reports of more arrivals to come were also made on March 27.

Concerns about TC Energy's intent to go ahead with the project were first addressed in a teleconference with the county commissioners as early as March 19 by state DES officer Jeff Gates. Specifically, concerns about how the project could remain compliant with health orders while moving forward.

In response to a series of questions from the Courier, TC Energy replied with an email stating, "As an organization, we have taken several steps to ensure the safety of our employees, contractors and community partners. Safety is our number one value, and our first concern is for all the employees, families and communities who may be affected by this situation."

The email went on to say that the company had closed municipal offices and was adhering to social distancing guidelines. In response to questions about the specific sites in Valley and Phillips counties, TC Energy said, "In regards to yesterday's discussion, we have outlined measures specific to the COVID-19 including pre-screening and on site hygiene protocols. We will continue to monitor the situation and update our plans as appropriate if the situation changes."

TC Energy sent the contingency plan on March 24. The Courier was informed about further recommendations made by the county health officer regarding the plan but those details were not available at press time.

The construction of the pipeline is deemed critical infrastructure by the US Department of Homeland Security and therefore is allowed to continue as planned provided measures are implemented and followed for safety under current orders.

According to TC Energy's project execution manager Greg Tencer, discussing the plan at a community meeting, the construction is set to start April 1 and will continue for about two months. Almost all of that work will be on the Canadian Border in Phillips County.

The Keystone XL pipeline project has been a controversial infrastructure project for more than a decade. After ascending to office in 2008, President Barack Obama denied the project a permit to cross the border with Canada, effectively stalling the project until 2017 when President Trump took office and issued or pushed for the required permits.

There are still a number of lawsuits pending, but a request for an injunction from environmental groups was denied by Federal Judge Brian Morris citing the fact that construction would not begin until Spring 2020.

In March 2020 Morris heard arguments from environmental and Native American lawyers on the merits of the federal permits, but did not make a decision for his ruling. According to an article by Hunter Pauli with the Montana Free Press, "Judge Morris did not rule on the case [March 6], and said he would deliver an order "forthwith."

You can view the full Barnard Pipeline plan on our website attached to this corresponding story.